Murphy, Buttigieg, other officials join to celebrate at ground-breaking ceremony 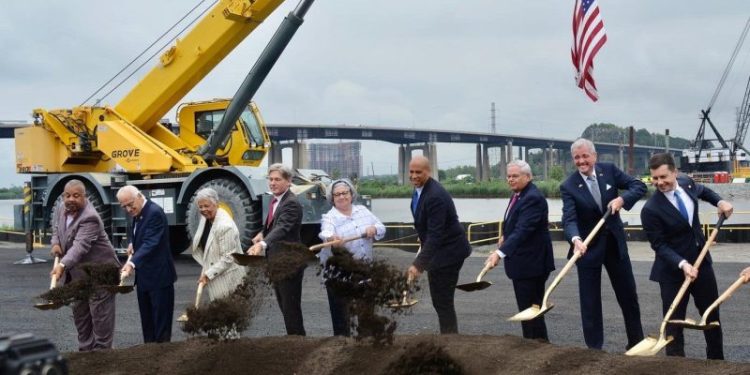 After years of planning, work has officially begun at the new Portal North Bridge.

“Safe, reliable, and modern infrastructure is about more than just getting to work on time. It’s also about the thousands of good-paying jobs this project will create and the families they support. By improving connectivity, we will also promote economic opportunity, not just for New Jersey residents and commuters, but for the Northeast Corridor and our nation,” said Murphy at the event. “The new Portal North Bridge symbolizes our lasting legacy and our commitment to the welfare and prosperity of all New Jerseyans.”

Lawmakers noted that projects like the North Portal Bridge are part of the beginning of funding from the Bipartisan Infrastructure Bill to make federal investments in the Garden State.

“After years of hard work, this is a huge win for Jersey to finally see shovels in the ground and people working on the Portal North Bridge…a top priority for the completion of the Gateway Train Tunnel,” stated Rep. Josh Gottheimer. “It will help residents spend more time with their families by commuting on faster, more reliable trains, create new jobs, and ensure Jersey’s economy is stronger and safer.”

Rep. Mikie Sherrill added “This groundbreaking for the Portal Bridge is the culmination of years of advocacy and hard work, as well as a new beginning for NJ-11 commuters who have suffered through too many arduous daily commutes and ‘summers of hell’.”

“The congressional delegation never hesitated to remind me of the importance of this project,” Buttigieg said. “This project is not just for residents of New York and New Jersey, but for people across the country.”

“It will improve reliability and safety for riders, eliminate cumbersome delays, and move us one step closer to completing the broader Gateway Program that is critical to our region and nation’s long-term economic competitiveness,” said Booker.

The Portal North Bridge is an important part of the Northeast Corridor and its renovation is part of the larger Gateway Program, which is expected to double rail capacity between Newark and New York.

“For our region, it will help us double rail capacity between Newark and Manhattan as part of the broader Gateway program. And for our communities, this project is directly tied towards more jobs, higher wages, and greater productivity,” said Menendez.

The project will include the demolition of the existing bridge, and related incidental works. Completion of the project is expected in approximately five and a half years.

“This project turns the Portal North Bridge from a chokepoint to an access point. It modernizes the way that people and goods get to and from this region that is responsible for 20% of America’s economic product every year,” said Buttigieg. “(President Joe Biden) is famously a big believer in passenger rail and a big believer in good paying jobs. That’s what you’re seeing here.”

Funding was acquired for the project from the U.S. Department of Transportation, New Jersey, New York, and Amtrak, with the federal government investing $766.5 million from the Federal Transit Administration to support to project’s construction. The construction contract was awarded to Skanska/Traylor Bros PNB Joint Venture.

“Portal Bridge celebrated its 112th year, that’s a long run in any job. In 2027, it will be torn down and that day can’t come quickly enough,” said Murphy.