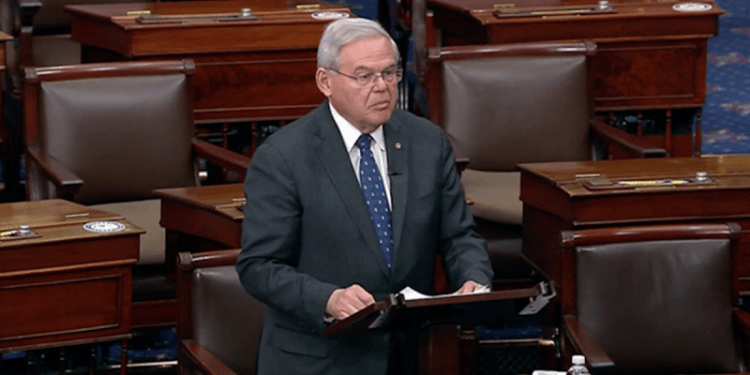 An agenda that seemed dead just two weeks ago, Democrats in the U.S. Senate passed the Inflation Reduction Act with Vice President Kamala Harris casting the deciding vote on Aug. 7.

Supporters of the bill trumpeted it as making the most significant federal investment in history to counter climate change and lower the cost of prescription drugs, based on some of the more popular programs of President Joe Biden’s Build Back Better Act.

The proposed spending bill allocates more than $370 billion into climate and energy programs. Altogether, the bill could allow the United States to cut greenhouse gas emissions about 40 percent below 2005 levels by the end of the decade. Additionally, it allows Medicare for the first time to negotiate the prices of medicines directly and capping the amount that recipients pay out of pockået for drugs each year at $2,000. The measure also would extend larger premium subsidies for health coverage for low- and middle-income people under the Affordable Care Act for three years.

The monies need to support the initiatives are paid for by substantial tax increases, mostly on large corporations, including establishing a 15 percent corporate minimum tax and imposing a new tax on company stock buybacks. But the bill did not address the rollback of the deduction cap on state and local taxes (SALT).

Facing unanimous opposition by Republicans, who have used filibusters to block many elements of their domestic agenda, Democrats took full advantage of the Senate’s special budget rule of reconcillation to force through as much of it as they could.

Republicans did succeed in forcing the removal of a $35 cap on insulin prices for patients on private insurance, challenging it as a violation of Senate rules. The insulin price cap for Medicare patients remained untouched in the bill, with the potential to help millions of seniors.

Passage of the measure capped a successful six-week stretch for Democrats that included final approval of a $280 billion industrial policy bill to bolster American competitiveness with China and the largest expansion of veterans’ benefits in more than two decades.

“It is a historic day for New Jersey families and Americans all across the country. The Inflation Reduction Act will transform the lives of millions by lowering the cost of prescription drugs to help seniors struggling to make ends meet, including provisions I authored like the $2,000 out-of-pocket cap and smoothing provision for Medicare beneficiaries, and strengthening health care access for millions of working-class families by extending subsidies under the Affordable Care Act for three years. Despite the obstruction of the fossil fuel industry, passing this bill is also a historic victory in our fight against climate change, marking the most impactful legislation Congress has ever passed to reduce our greenhouse gas emissions and putting us on a path to reduce emissions by 40% by 2030. This legislation will also close tax loopholes abused by the largest corporations, create millions of good-paying jobs, and cut costs for American families.

“While Republicans tried every obstructionist tactic in their playbook to undermine and weaken this bill at every turn, Democrats stood united and remained singularly focused on delivering a once-in-a-generation investment in American families. This is not a perfect bill – it does not repeal the Republican-imposed SALT cap or reform our broken immigration system – but the benefits of this legislation for New Jersey families cannot be understated.

“Today, Democrats proved yet again we can deliver results for the American people, from our seniors to our small business owners to everyone in between. I will continue working to find a path forward for repealing the SALT cap for hard-working middle-class families and building a more humane and inclusive immigration system for all. My Democratic colleagues and I will never stop working to deliver real substantive solutions to address the most pressing challenges facing our nation.”

“With commonsense reforms that will allow Medicare to negotiate prescription drug prices and cap out-of-pocket costs, we will protect seniors from outrageous prices charged by pharmaceutical companies for lifesaving medications. This bill also provides an additional three years of Affordable Care Act subsidies which will lower health care premiums for millions of Americans. We will also make the largest-ever Congressional investment to address the threat of climate change, moving our country toward cleaner energy production and reducing carbon emissions by roughly 40% within the decade. All of this will occur without increasing taxes on middle and lower-income families and individuals; instead, the biggest corporations will finally pay a fairer share.

“Importantly, the Inflation Reduction Act also invests $60 billion for environmental justice priorities, which will address legacy pollution, reduce air pollution in overburdened communities, and provide federal assistance to low-income consumers to make their homes more energy efficient. As a co-chair of the Senate Environmental Justice Caucus, I am proud to have championed these initiatives. I also recognize that Black and Brown communities, like my home city of Newark, require additional investments to equitably transition to a clean energy economy, and to ensure that clean air and clean water are not a privilege for some but a right for all. I remain committed to fighting on behalf of these underserved and disadvantaged communities.

“This bill will reduce costs for Americans and fight inflation.  I am proud to have voted for it, and I urge the House to pass it swiftly.”

“We all know how high the cost of living is in Northern New Jersey. I ran for Congress to tackle those costs on behalf of the people of the 11th Congressional District. That’s exactly why I’m voting for the Inflation Reduction Act of 2022.

“After three decades of politicians in Washington talking about lowering prescription drug prices, I’m proud to have helped force Congress to actually drive drug costs down and empower New Jersey families as we battle global inflation.

“This bill also invests in the next generation by creating good-paying jobs in clean energy and addressing the climate crisis.

“In cracking down on tax evasion and ensuring that our largest corporations are helping to fund America’s innovation economy, this bill makes the tax code fairer for our middle class families and increases opportunity.

“By investing in the middle class, we are making life more affordable for families in New Jersey. The groundbreaking of the Gateway Tunnel Project, the passage of the CHIPS and Science Act, the strong July jobs report, and the current 50-day streak of lower gas prices at the pump all highlight the impact of our investments in families and communities. I will continue to work to bring costs down even further.

“I will also remain steadfast in my commitment to ensuring that any discussion of reforms to the 2017 tax law begins with addressing SALT. Because this legislation does not raise taxes on families in my district, but in fact significantly lowers their costs, I will be voting for it.”

“After careful review, it is clear that the Inflation Reduction Act is good for the families and small businesses in northern New Jersey. This bill passes my key test that I’ve pushed for since day one: it does not raise taxes on individuals, families, or small businesses in my District. The Inflation Reduction Act makes no changes to personal income tax rates or those impacting small businesses. That has always been my red line, and it is the key to delivering affordability for our families. In fact, it cuts costs and represents a projected tax cut of more than $550 million for my District — more than $2,000 for every family.

This legislation is a huge win for New Jersey — it will lower prescription drug prices, especially for seniors, boost domestic manufacturing, provide support for families struggling with the high cost of health insurance, create jobs, and put in place the most important climate investments in our nation’s history.

The bill is fully paid for, in part, with provisions that go after tax cheats. It will also help pay down the debt — a fiscally-responsible way to get inflation down.

As for SALT, my line in the sand remains the same. If someone tries to change the tax rates on families in my District, I will insist that we restore the State and Local Tax Deduction. This legislation doesn’t raise taxes on families in my District — it reduces the financial burden on them. For that reason, and for its strong support of the climate, lower prescription drug prices, and job creation, I’ll be voting for it.”

“Today, Senate Democrats sided with American families over special interests, voting to lower the cost of prescription drugs, health insurance, and everyday energy costs and reduce the deficit, while making the wealthiest corporations finally pay their fair share.  I ran for President promising to make government work for working families again, and that is what this bill does — period.

This bill caps seniors’ out of pocket spending for prescription drugs at $2000 per year – no matter what their drug bills would otherwise be, seniors will not have to spend more than $2000.  In addition, 13 million Americans, covered under the Affordable Care Act, will see their health insurance premiums reduced by $800. This bill tackles inflation by lowering the deficit and lowering costs for regular families.

This bill also makes the largest investment ever in combatting the existential crisis of climate change.  It addresses the climate crisis and strengthens our energy security, creating jobs manufacturing solar panels, wind turbines, and electric vehicles in America with American workers.  It lowers families’ energy costs by hundreds of dollars each year.

Finally, it pays for all this by establishing a minimum corporate tax so that our richest corporations start to pay their fair share.  It does not raise taxes on those making under $400,000 a year – not one cent.

I want to thank Leader Schumer and every member of the Senate Democratic caucus for supporting this bill.  It required many compromises.  Doing important things almost always does. The House should pass this as soon as possible and I look forward to signing it into law.”