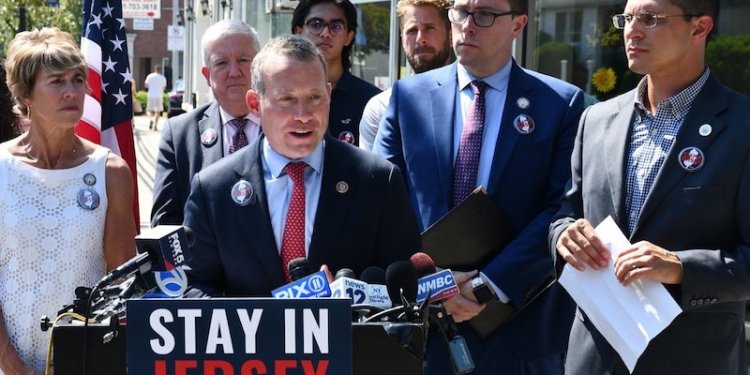 Gottheimer started the campaign earlier this year to urge companies that employ Jersey residents who used to commute to New York City every day prior to the pandemic, but then worked from home or a local office as the region recovered, to keep working from home.

“The ‘Stay in Jersey’ bill will establish a new incentive program to provide New York businesses with tax credits for expanding business operations into New Jersey — closer to the primary residence of existing Jersey full-time employees — to help them avoid having to drive into the city and get whacked by the Congestion Tax,” said  Gottheimer at a press event Aug. 9 in Fair Lawn.

The bill from the 38th lawmakers would establish the “Expand New Jersey Assistance Program” to incentivize New York-based businesses to set up regional hubs in New Jersey through the New Jersey Economic Development Authority. The bill establishes a new $15 million per year program through 2027 to provide New York businesses with tax credits for expanding business operations into New Jersey — closer to the primary residence of existing Jersey full-time employees.

“Encouraging people to live in New Jersey isn’t difficult …It’s our task now to encourage businesses to recognize the benefits of being in New Jersey, and to get the ball rolling on their relocation efforts,” said Swain.

The proposed bill was announced on the day before Metropolitan Transportation Authority (MTA) released an in-depth study of what the traffic, pollution and tolling outcomes could be in seven different scenarios of congestion pricing with varying credit options for tolls already paid at crossings and exemptions of certain types of vehicles.

The new tolls to enter Manhattan below 60th Street, could range from $9 to $23 during peak hours, $7 to $17 during off-peak hours, or $5 to $12 overnight. These potential tolls would be in addition to tolls paid at other crossings used to reach midtown Manhattan, like the Lincoln Tunnel, Holland Tunnel and George Washington Bridge.

“Recent actions by neighboring states to add exorbitant congestion pricing fees on top of what New Jerseyans already pay, also made clear the need to reduce commuting costs,” said Lagana. “It’s no secret that working close to home benefits not only residents themselves, but is a boon to local economies. Business hubs spur economic development and investment in our mom and pop shops, local eateries and markets, and boutique downtown stores.”

Gottheimer offered that North Jersey residents by working without having to cross a bridge or through a tunnel would save nearly $20,000 avoiding the expensive tolls, the cost of parking and gas, and New York’s proposed Congestion Tax. The congressman noted the MTA recently struck a deal with the U.S. Department of Transportation to move forward as early as 2023.

“Just read MTA spelled backwards and it tells you exactly how New York looks at New Jersey right now: as their personal ATM,” he said “The MTA Congestion Tax board is getting ready to make a big withdrawal from Jersey drivers with the Congestion Tax scheduled to begin as soon as next year. The last thing that a terribly mismanaged government authority needs — one riddled with investigations — is more money.”

Both the state and federal lawmakers highlighted the proposal would reward businesses that reduce commuting costs for employees that live in New Jersey, automatically make any business applicants from New York City more likely to be accepted and receive the New Jersey tax credit.

“Our team has been working closely to address this issue, and to counter New York’s damaging congestion tax on New Jerseyans crossing the bridge for work,” said Tully. “What came out of these conversations was an exciting plan to incentivize businesses to relocate to New Jersey, creating hubs for people to work, live, and do business right in their communities.”

Last week, Gov. Phil Murphy told U.S. Transportation Secretary Pete Buttigieg that “there is no way, no how, that will happen with the double taxation of New Jersey commuters” in regards to the congestion tax at the groundbreak ceremony for the North Portal Bridge. While Murphy expressed optimism that a resolution could be reached, he said “it won’t happen with a double tax.”

The legislation by North Jersey state legislators comes after two actions by Gottheimer in Washington. The first provision would prohibit New York City’s Metropolitan Transportation Authority (MTA) from using federal dollars until vehicles entering the Congestion Tax zone from the Holland Tunnel, the Lincoln Tunnel, or the George Washington Bridge are credited an amount equal to the toll charged.

The second provision, which featured support from Rep. Nicole Malliotakis (R-NY), would prohibit federal dollars from being used to implement Congestion Tax programs for any road, bridge, or tunnel until an economic impact analysis was completed and presented to the public.