Bill set to be voted on by the House August 12 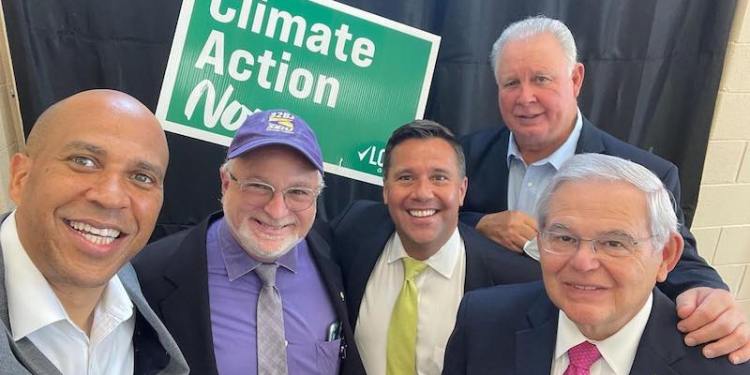 In an historic  marathon session on Capitol Hill, New Jersey Senate Democrats Bob Menendez and Cory Booker voted in support of the landmark legislation dubbed the Inflation Reduction Act of 2022.

The contentious bill was passed along party lines (with no Republican support), under the budget reconciliation process, which allows for a simple majority vote.

Back at home in New Jersey, Menendez, Booker and Congressman Albio Sires along with a group of senior citizens and several advocacy groups praised the pending bill, promoting that it will reduce the cost of prescription drugs, expand health care access, create millions of good-paying jobs, and make critical investments in the fight against climate change.

An elated Menendez explained to the group in Elizabeth Aug. 9 how the pending bill would benefit New Jersey families.

“This legislation will transform the lives of millions by lowering the cost of prescription drugs to help seniors struggling to make ends meet, including provisions I authored like the $2,000 out-of-pocket cap and smoothing provision for Medicare beneficiaries, and strengthening health care access for millions of working-class families by extending subsidies under the Affordable Care Act for three years,” said Menendez.

“Too often our seniors have had to choose between affording their medication and putting food on the table, or taking a vacation, or simply enjoying their senior years,” said New Jersey’s Senior Senator. “This bill will end these horror stories once and for all while also supercharging our nation’s fight against climate change by putting us on a path to reduce emissions by 40% by 2030.”

Menendez argued the bill will strengthen health care access by extending subsidies under the Affordable Care Act for 3-years, with more than 260,000 New Jersey residents receiving ACA tax credits. Additionally, the bill would reduce prescription drug costs for individuals on Medicare, with out-of-pocket costs capped at $2,000 per year.

Booker’s turn to take a victory lap to explain how the legislation Senate Democrats passed took a “historic” step forward to reduce consumer costs, combat climate change, and implement a fairer tax code he views as a “transformative piece of legislation.”

“The Inflation Reduction Act includes provisions that are broadly supported by the American public, including allowing Medicare to negotiate prescription drug prices, capping out-of-pocket costs for seniors, and making the largest Congressional investment ever to address the existential threat of climate change,” said the former Newark Mayor. “It also includes critical environmental justice priorities that will help address legacy and ongoing pollution in overburdened communities that are disproportionately Black and Brown.”

Lawmakers on both side of the aisle view the bill as geared more towards environmental issues, such as cutting greenhouse gas emissions by 40% by the year 2030, investing billions of taxpayer dollars on home energy rebate programs, along with tax credits for renewable energy, electric vehicles, rooftop solar, and other clean energy technologies and a $1-billion-dollar grant program making affordable housing more energy efficient.

The House is set to vote on the bill Aug. 12 with President Joe Biden expected to sign it later that day. Rep. Albio Sires applauded Menendez and Booker for their dedicated work to pass the bill he sees as benefiting “so many New Jerseyans.”

“Over the years, I have heard from many constituents who had to choose between expensive but essential medication and other necessities,” said Sires. “This historic bill will help put money back into the pockets of those constituents while ensuring they have access to quality health care. I look forward to voting in favor of the Inflation Reduction Act when it comes before the House and sending it to the President’s desk for his signature.”

Although the bill is referenced as an “inflation reduction” bill, critics argued it does little to accomplish that. According to an official summary issued by the nonpartisan Congressional Budget Office, which is still scoring the effects of the bill on the economy, “the impact on inflation is statistically indistinguishable.”

The pending bill would invest approximately $300 billion in deficit reduction and another $369 billion in energy security along with climate change programs over the next 10 years. The additional spending comes at a time when inflation currently stands at 8.5%, the highest since November 1981.

The raises in revenue would be accomplished by a 15% tax increase on corporations with over $1 billion in revenue that is estimated to affect 150 companies and $80 billion dollars earmarked to the IRS intended to strengthen the agency’s enforcement apparatus by adding an additional 87,000 new IRS agents.

“With this bill, we are closing tax loopholes abused by the largest corporations, creating millions of good-paying jobs, and cutting costs for American families,” said Menendez.