Extremists, parental rights at center of debate between NJEA, lawmakers 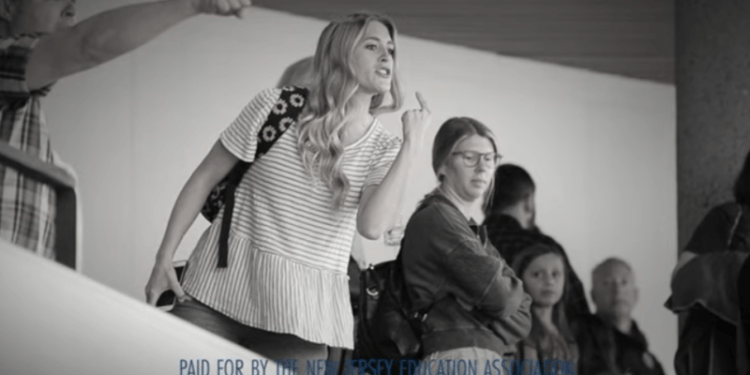 During their two-hour virtual hearing last month, Republicans took aim at the role the New Jersey Education Association (NJEA) has played in the debate over parents concerns about the new health and sex education standards being implemented this school year.

Lawmakers and activists have bristled at a recent NJEA ad that attacks “extremists” for their aggressive tactics at school board meetings in the last year for issues such as COVID protocols, parental rights and concerns about how young to teach about sex in New Jersey schools.

The latest sticking point is NJEA running advertisements on TV and online to coincide with the back-to-school season. The ad begins by stating that New Jerseyans do not agree on everything such as the Taylor Ham/Pork Roll debate then shows children with teachers, interspersed with photos of people shouting and angrily showing up at what viewers are led to believe are school board meetings.

“When extremists start attacking our schools to drive a wedge between us, we take it personally, because that’s not who we are,” the narrator says in the ad. “We’re parents, teachers, neighbors and friends who all want the same thing, great schools where our students can learn and grow. People who only want to fight and argue to score political points should take that somewhere else.”

Issues with the ad were first raised by State Sen. Ed Durr (R-3), who stated parents are not extremists for questioning what is being taught to students.

“Despite what the NJEA says, parents are not extremists for expressing concerns about curriculum mandates or wanting to have a voice in their children’s education,” said Durr. “It’s another example of the NJEA being out of touch with parents and totally tone deaf to their concerns that sensitive topics such as sex education and gender identity are not appropriate for young kids. Frankly, the NJEA is taking an extreme position by attacking parents instead of listening to them.”

Pennacchio open the meeting by stating that “under the guise of diversity, inclusion, and equality, we have seen what I view as a sexual indoctrination of our children as young as four and five years old. We would expect…respect and tolerance for parents and their absolute rights, as parents, to determine what is in the best interests of their children.”

After playing the ad, Pennacchio said that the parents raising the issue were not “nefarious actors” but “just concerned moms raising their children.”

Panelists and politicians offered that there is a disconnect with local school boards and parents on one side and state educational leaders, including the NJEA, on the other.

“NJEA ideology is separate from teachers,” said panelist Kathy Stanzione, a former teacher and school board member. “The fear factor they have been placing with parents is the same one they do with teachers.”

Durr added that “apparently the NJEA …seems to have forgotten that our public schools exist to serve parents and their children, not the far-left politics of the union’s leadership. They shouldn’t be shocked that parents who feel ignored and marginalized are finally pushing back to right the ship.”

A day after the hearing, the Assembly Republican Office released a parody video for calling outspoken parents “extremists.” The video theme is that if the NJEA were honest in its commercials, it is the teacher’s union that has the radical agenda.

“Stop resisting our agenda and accept that you have no control over your children’s education. To all the radical extremist parents out there, back off. We are…..the NJEA,” reads the spoofed voice-over.

The NJEA complained to YouTube that the parody used copyright images from the original advertisement, and it was taken down. But asking for the removal, which is still available online on other social media outlets, just reinforced Republicans convictions that the union is against their legislation protecting a parent’s right to be involved in age-appropriate education.

“The NJEA’s action only drives home the Republicans’ point that they will stop at nothing to censor differing opinions, whether it is parents at board meetings or political speech in a video,” Assembly Minority Leader John DiMaio (R-23) said. “Instead of being willing to have a conversation, they would rather completely shut down people who are concerned or disagree. This is why parents are so irate. The NJEA pushes controversial policies and ideology on our children and when there is pushback, they bring out the censorship police.”

But an NJEA’s spokesperson Steven Baker argued their ads have made it clear that “parents are important partners in creating great schools. Parents are never referred to in any negative or critical way…(we have) great respect for the important role that parents play in the success of our students and schools.”

But Baker continued that the union is “very concerned, however, by the small but very loud group of people who are doing dishonest and dangerous things, like calling educators pedophiles and racists simply because those educators are teaching appropriate in accordance with the state’s approved, age-appropriate standards. As a union, we will not remain silent while dedicated educators are slandered or attacked for doing their jobs.”