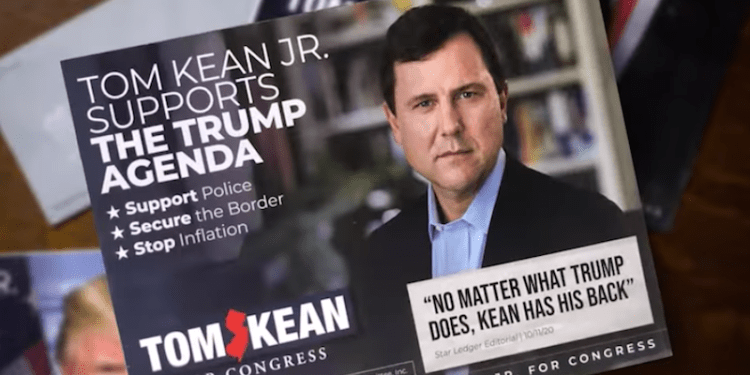 With Labor Day passed, three North Jersey incumbent Democrats running in pivotal races that will determine control of the House hit the airwaves with new television ads this week.

Reps. Josh Gottheimer, Tom Malinowski and Mikie Sherrill all premiered 30 second spots for their races on Tuesday and Wednesday. While Gotthemier’s and Sherrill’s were more of a biographical introduction ad that candidates historically roll out first, Malinowski’s was focused on linking Tom Kean Jr. to Donald Trump.

Already the third from the Malinowski camp this cycle in the 7th Congressional District race, the ad entitled “Own Words” features an image of an empty suit with a red hat to emphasize Kean’s “spineless and public devotion to Donald Trump,” according to a campaign spokesperson.

“Tom Kean Jr. uses every chance he gets to prove his loyalty to Trump and the MAGA crowd,” said Communications Director Naree Ketudat. “He is telling us in his own words exactly what he plans to do for this district if elected – have Donald Trump’s back no matter what. No matter the lies, the violence, and the division of the past, present or future.”

Most prominent in the ad is a mailer that Kean sent during the primary that features the headline “No matter what Trump does, Kean has his back” and included an empty suit with the Make America Great Again red hat.

The voice over for the ad askes “Having Trump’s back? Or having a backbone? Tom Kean Jr. made his choice. Following Trump. No. Matter. What. After all that’s happened. The violence. The lies. And all that would. More chaos. More division. A national abortion ban. Trump and the MAGA crowd know they can count on Tom Kean Jr. Because Tom Kean Jr. promised them. No matter what.”

This is the fourth ad put out by the two candidates in the race. Kean has only produced one ad so far, focused on the economy. The former State Senator states that “instead of heeding economists’ warnings, Tom Malinowski followed Nancy Pelosi and backed billions in wasteful spending. I’m Tom Kean Jr. I’m running for Congress to…to get prices down and stop reckless spending.”

During August, Malinowski produced two ads–one focused on his story of emigrating from communist Poland and how it influenced his long history of standing up to bullies like dictators, corporate donors, and GOP extremists; the second on abortion.

The tone of Malinowski’s ad differs from his two colleagues who promote their bipartisan accomplishments in Washington. Gottheimer’s first television ad highlighted his work as a problem solver for North Jersey families in the 5th Congressional District.

“There are extreme sports and extreme thrills,” Gottheimer says at the beginning of the ad. “One thing that drives me nuts: extreme politics. That’s why I work with both parties to get funding to fix our roads and bridges, and deliver resources for police, veterans, and our small businesses. I helped lower the costs of prescription drugs and defend a woman’s right to choose. And I always look out for ways to cut waste and cut taxes. I’m ranked the most bipartisan member of Congress, because I’m a problem solver, and I work for you—not the extremes in either party. That’s common sense; those are Jersey values. I’m Josh Gottheimer, and I approve this message.

In a press release with the ad, the Gottheimer camp promoted his role as co-Chair of the bipartisan Problem Solvers Caucus in helping to pass the Bipartisan Infrastructure Bill “to fix our crumbling roads and bridges, delivered critical resources for our police, veterans, and small business, and has always fought to protect a woman’s right to choose. As congressman, Gottheimer will continue his work to lower taxes, cut the debt, reduce prescription drugs prices, and make life more affordable for families in North Jersey.”

As for Sherrill, “Mission” starts with the 11th District Congresswoman doing the voiceover talking about her grandfather flying  B-24 bombers during World War II that lead to her 10 year service in the Navy.

The ad’s script begins with Morris County lawmaker telling the story of her grandfather who “flew B-24 bombers in World War II.  Even survived being shot down. … Growing up, I wanted that same sense of mission: serving something bigger than myself. I graduated from the Naval Academy at Annapolis and flew Navy helicopters. Now, in Congress, putting country over party is my mission. Working with everyone to lower your taxes, your everyday costs, because my mission is serving you. And that’s why I approve this message.”

The opponents for Gottheimer and Sherrill—Frank Pallotta and Paul DeGroot—have yet to air an ad.