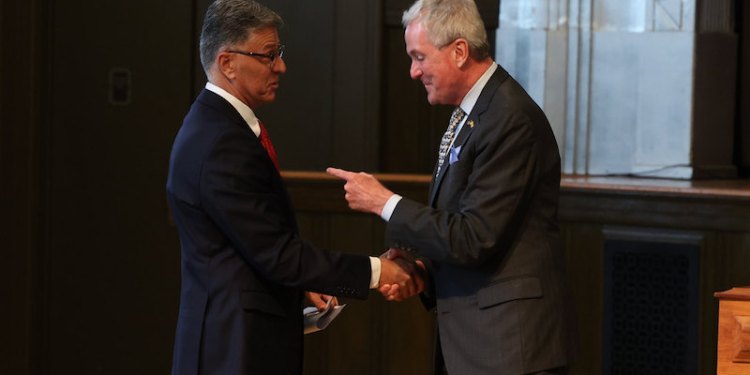 The nomination of Fasciale was part of an agreement the governor reached last month with State Sen. Holly Schepisi (R-39) for her lifting the senatorial hold on the nomination of Englewood resident Rachel Wainer Apter.

Murphy praised Fasciale, who served as presiding judge of both the criminal and civil divisions in Union County before being elevated him to the appellate division in 2010, for his distinguished service that has him prepared to serve on the state’s highest court.

“It is my honor to announce my nomination of Douglas Fasciale to serve as the 42nd justice in the 75-year history of the New Jersey Supreme Court,” said Murphy. “This nomination will send a strong message to leaders across our nation, signifying that the importance of judicial independence and impartiality must transcend partisan politics.”

Fasciale is not unfamiliar with the state’s highest court—in recent months he was temporarily assigned to the Supreme Court to help fill one of the three vacancies in the court.

“I am grateful for the confidence you have shown in me,” said Fasciale to Murphy. “Your trust inspires in me the desire to be the best I could possibly be.”

Both men noted the national reputation of the New Jersey Supreme Court and Murphy contrasted that with the current view of the U.S. Supreme Court.

“His ascension to our state’s highest court will send a strong message to all New Jerseyans—and I hope to leaders throughout our nation—of the importance of judicial independence and impartiality, and of the critical need for restoring balance over partisanship in our court,” said Murphy. “We have a state Supreme Court that has maintained its reputation and respect even as the U.S. Supreme Court’s standing has fallen in the eyes of so many.”

Murphy noted that maintaining the court’s ideological balance is something he has maintained in his years in office and “for the last year and a half…have heard from Senator Schepisi how important the tradition is to her, as a Senator, a lawyer and member of the New Jersey Bar.”

“Judge Fasciale may be a registered Republican, but he commands universal respect across the legal community. He also has my tremendous respect.”

Fasciale said that through the process, he saw first hand that Murphy and members of his staff believe in the separation of the branches of government. Murphy later joked that he was sad to know at then end of the interview process that would be the “last time we talked in private.”

“The governor and his staff care deeply about the judiciary and most importantly the independent role that our Judiciary plays in our tripartite system of governance,” said Fasciale. “As someone who spent seventeen years as a litigator and trial attorney in New Jersey courts, and then eighteen years as a judge at different levels in our judiciary, I have devoted my entire career to the legal system of our state. I am so grateful to have the opportunity to continue this service on our state’s highest court.”

The nomination of Fasciale ends the standoff over Wainer Apter, who was first nominated by Murphy in March 2021 to fill the vacancy created when Justice Jaynee LaVecchia announced her intention to step down. Schepisi said she held the nomination of the Englewood resident to ensure the 70-year tradition of having a political power balance on the state’s highest court—Wainer Apter is a Democrat and Fasciale is a Republican.

While LaVecchia voluntarily retired at the end of 2021 after announcing her decision in March of that year, Justices Barry Albin and Faustino J. Fernandez-Vina have both left the bench due to reaching the mandatory retirement age of 70 in the meantime. Fasciale is being tapped to fill the Fernandez-Vina vacancy.

Murphy renominated Wainer Apter, a former ACLU staff attorney and law clerk to U.S. Supreme Court Justice Ruth Bader Ginsburg, after being sworn in as governor earlier this year. Looking to end the stalemate, Wainer Apter said she was considering moving out of Bergen County in order for her nomination to be considered by the State Senate Judiciary Committee.

The nomination of Wainer Apter, 42, and Fasciale, 61, leaves a seat open on the seven member court. Schepisi indicated the seat will remain open for the time being until 68-year-old Justice Lee A. Solomon leaves the bench. Speculation has swirled that the former Republican assemblyman is considering stepping down before the mandatory retirement age.

“Two additional judges will move upon Solomon’s retirement,” Schepisi said. “I will be working very closely with the governor’s office as to who those nominees will be. I will have a seat at the table.”

The reported schedule is for Murphy to formally nominate Fasciale on Sept. 22, with the Senate Judiciary Committee tentatively set to hold confirmation hearings for Wainer Apter and Fasciale on Oct. 13.  The full Senate could vote on the two Supreme Court nominees that day.

The makeup of the State Supreme Court will be one of the lasting legacies of Murphy’s tenure as governor.

Justice Fabiana Pierre-Louis, the first black woman to sit on New Jersey’s Supreme Court, was confirmed in 2020. With Wainer Apter and Fasciale, and possibly two more nominees in the near future, he would have chosen five of the seven justices by the time he leaves office in 2025.