Kean gets nod in 7th District, police union has not made a declaration in the 11th 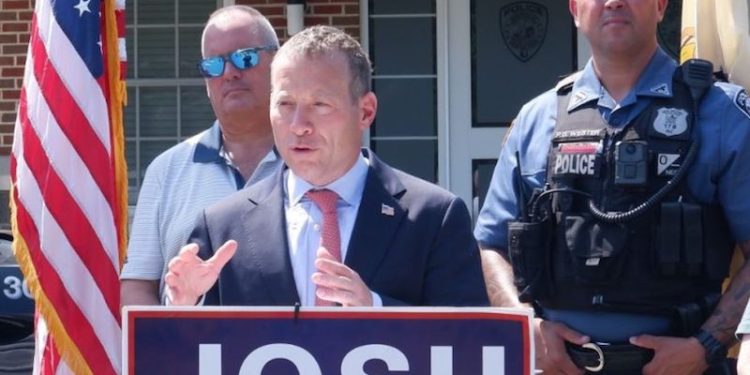 There aren’t many endorsements that are more desired in North Jersey—or by any politician for that matter—than the backing of a police union. In the Congressional races this year, they may provide a tipping point in some of the closest contests in 2022.

The most sought after in North Jersey is the New Jersey State Policemen’s Benevolent Association (NJSPBA), one of the most politically conservative unions in the state with 33,000 members who vote. While the endorsement had previously depended on local issues such as pay and pensions, a new era was ushered in  after the death of George Floyd, COVID policies and calls by extremists for defunding of the police.

For the 2020 election, the union PBA backed former President Donald Trump and an all-Republican slate of congressional candidates in New Jersey. But the NJSPBA did not endorse either Gov. Phil Murphy or GOP nominee Jack Ciattarelli in the governor’s race in 2021 and Democrats are hoping the actions of Trump supporters on Jan. 6 will make the union think twice about backing a GOP candidate.

That is why it was considered a big victory when Rep. Josh Gottheimer won the endorsement from NJSPBA over the Summer. The 5th District Congressman, facing a rematch against Frank Pallotta, has been one of the leading voices in his party that he would not support any defunding of the police. The union did not make an endorsement in the 2020 race for either candidate.

“Congressman Josh Gottheimer has proven to be a fierce, loyal advocate for law enforcement, firefighters, and all first responders,” said Colligan in New Milford to make the announcement in August. “Josh’s advocacy for first responders does not just help his district, he fights for officers throughout the country. We thank him for his tireless work in Congress to pass his bill, the Invest to Protect Act, to support local law enforcement.”

Earlier this year, Gottheimer introduced the bipartisan Invest to Protect Act, to make investments in local police departments and ensure officers in smaller communities in New Jersey and across the country have the resources, equipment, training, and support they need to keep themselves and their communities safe. The bill has passed the U.S. Senate and awaits actions in the house, where it has 85 bipartisan co-sponsors.

“In Congress, since day one, I’ve fought for our law enforcement officers, and all first responders who serve our communities, because, for me, it always boils down to this: we must have the backs of those who always have our backs,” said Gottheimer, who has since elected in 2016 prioritized clawing back federal money to help first responders upgrade their equipment.

One of the original co-sponsors of the Invest to Protect Act is Rep. Mikie Sherrill, who said at the time of introduction that “New Jersey is proud to have the most professional law enforcement and first responders in the nation and many of them serve on smaller municipal forces in our local towns and communities…our local police forces need support to continue doing their jobs effectively and safely. This bill offers that support by providing funding for equipment like body cameras, investing in de-escalation and domestic violence response training, and bettering the mental health resources available for the local departments and officers that people interact with the most.”

But her being part of the bill from the beginning has not resulted in backing from the police union so far, where Sherrill is facing former Passaic County prosecutor Paul DeGroot. The case with Sherrill shows how local issues are no longer the top priority  for the union since the Congresswoman first ran for office.

In 2018, NJSPBA backed the former federal prosecutor over Assemblyman Jay Webber (R-26). That year, their endorsement read in part that “the NJSPBA knows that in Congress, Mikie will stand up for a secure retirement and good healthcare. That stands in stark contrast to Assemblyman Jay Webber, who has a career in Trenton of voting against the interests of our communities.” Sherrill would go on to win the seat for the first time in over 30 years for a Democrat.

But two years later when the union cast their lot with Republicans across the board, GOP candidate Rosemary Becchi sought to tie the Navy vet to the extreme left and Speaker of the House Nancy Pelosi on votes to defund the police. Becchi campaigned that Sherrill was a Washington politician more concerned with playing partisan political games than solving problems and properly backing police officers.

“I will protect our families by supporting law enforcement and opposing radical proposals to defund the police,” stated Becchi, who would lose by six percentage points in 2020.

Sherrill has since sponsored legislation she sees as promoting good police training and encourage local police forces to implement recruiting and hiring practices that take into account the population served like those in North Jersey.

DeGroot counters those arguments on his website by proclaiming that progressive politicians he sees Sherrill casting her lot with and liberal judges have coddled criminals and made excuses for crime.

“The results of liberal bail reform and other attempts at ‘social justice’ have been to embolden criminals to commit more crimes against you, your family and your property,” it states on his website. “Why shouldn’t they? The likelihood of real punishment in many jurisdictions is remote. Police arrest bad guys and liberals let them free within hours.”

While undecided yet in the 11th, the union threw its support behind Tom Kean Jr. in mid August in his rematch with Rep. Tom Malinowski in the 7th Congressional District.

“As the far left in Congress continue to push for laws to defund the police, to strip us of our qualified immunity protections and to make it harder to do our jobs, we know you will be a voice of reason and a vote to defend the men and women of law enforcement,” Colligan wrote in a letter to Kean. “But your years of honesty and loyalty to us have proved without question that you have the guts to challenge anyone who attacks the men and women of law enforcement.”

It is not surprising the union is lined up against Malinowski, who has pushed for social justice reforms since being elected in 2018. Besides backing Kean in 2020, the NJSPBA endorsed former office holder Rep. Leonard Lance when Malinowski first ran.

Correction: An earlier version of this story said NJSPBA backed GOP candidate Frank Pallotta in the 2020 race. The union did not back either candidate in the race two years ago.