Half of nursing homes cited are in North Jersey 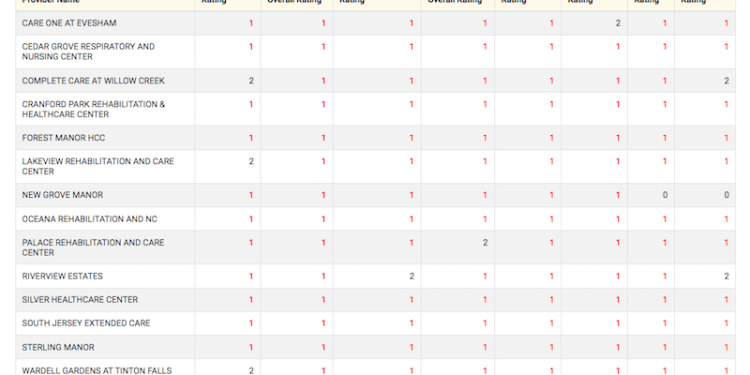 According to an updated report by the Office of the State Comptroller (OSC), 12 nursing homes within the Garden State have continually received a dismal performance rating.

The original February report conducted by the state’s Department of Human Services and the Centers for Medicare & Medicaid Services (CMS), has also announced they will no longer provide additional state funding to those facilities receiving a one-star rating. The report identified and listed all 12 nursing homes collectively receiving state funds from New Jersey’s Medicaid program, totaling $107 million dollars annually.

“New Jersey’s Medicaid program continues to provide substantial funding to nursing homes despite their longstanding failure to improve the safety and quality of their care,” said Acting State Comptroller Kevin Walsh. “These one-star facilities have received hundreds of millions of Medicaid dollars while being repeatedly cited for serious health and safety issues.”

Just before the original report was released, OSC recommended that all additional incentive payments made through the state’s Medicaid program be restructured and modified to encourage quality care within nursing homes and long-term care, facilities throughout the Garden State. The new initiative, dubbed the Quality Incentive Payment Program (QIPP), provides bonus payments to facilities that meet or exceed specific quality goals.

The new program launched on July 1 rewards those nursing facilities that have implemented New Jersey’s Department of Human Services new guidelines. However, none of the 12 nursing homes cited within the report for poor performance are currently eligible to receive any additional payments through the QIPP, in state fiscal year 2023.

Nursing homes and long-term care facilities that have received the lowest CMS overall rating of one-star in the first month of each quarter for six of the past eight quarters from October 2020 to July 2022, will not be eligible to receive incentive payments.

The February report found 15 nursing homes within the Garden State fell within that discouraging category. However, to date, six nursing homes have moved off the poor performance list, while three new nursing homes were added to the list along with nine nursing homes being added to both lists. The report also announced that one of the nine troubled nursing homes was recently forced to shut down.

“While I’m glad to see change in a positive direction, there’s more work to be done,” said Walsh. “We urge the state to take actions that will improve conditions for all residents in nursing homes, including those who are on Medicaid.”

“We should reward nursing home operators who improve their quality of care and penalize those that consistently fail to do so. We will continue to update our findings and share with the public the actions agencies have taken to push for better quality of care for all nursing home residents.”

Aside from the annual $107 million dollar price tag earmarked to the 12 lowest-rated nursing homes in the Garden State, those facilities according to the report service approximately 1,835 elderly Medicaid recipients currently living in substandard conditions within those facilities.

Moreover, authorities noted all of these facilities are currently operated by “for-profit” companies that have failed for years to improve conditions within those at-risk nursing homes.