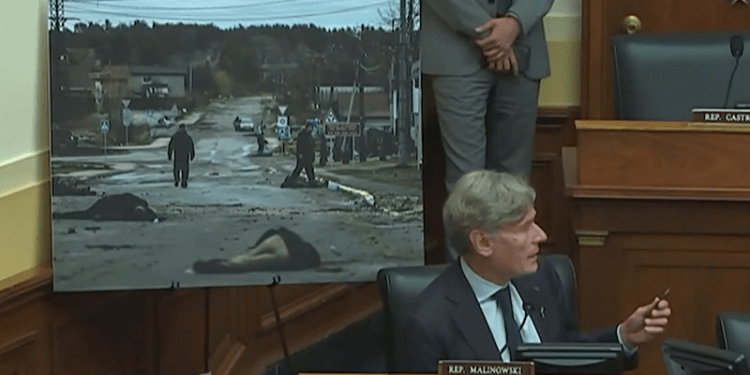 The bill will press the Biden Administration to impose sanctions on nearly 200 Russian officials and other leading figures as identified by anti-corruption activists from Anti-Corruption Foundation.

“Putin’s aggression against Ukraine was made possible by his suppression of dissenting voices in Russia,” said Malinowski.

“With this bill, we are sending a clear bipartisan signal that Congress stands with the people of Ukraine and with those brave Russians who have been asking us to take action against Putin’s corrupt enablers,” he added.

After the bill was advanced by the House Foreign Affairs Committee, Malinowski noted the bipartisan support for the bill was born of the horrendous scenes in the Ukraine.

“This is a familiar image, I hope, to all of us now, seen following the massacre in the Ukrainian village of Bucha. And of course, we know it’s only one of many atrocities committed by the Russian military against the Ukrainian people,” he said while showcasing a picture on the House floor.

The Congressman said he had a piece of shrapnel from the fighting in Kharkiv which helped to remind him of the fighting, but also showed a picture of Russian dissident Vladimir Kara-Murza.

The Anti-Corruption Foundation is led by poisoned and imprisoned leader Alexei Navalny, and originally identified a list of 35 key corrupt Putin regime enablers in 2021.

The group said these people should be sanctioned by friends of the Russian and Ukrainian people, and under the bill, the Biden Administration will need to investigate sanctions on the individuals or to prove why they cannot be sanctioned pursuant to the provisions of the Magnitsky Human Rights Act.