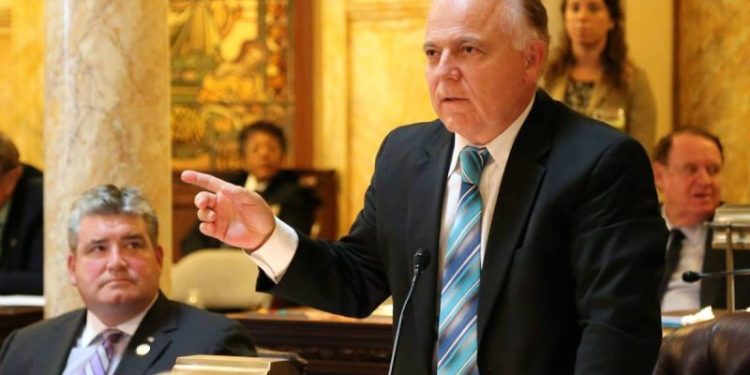 State Sen. Joe Pennacchio (R-26) took aim at what he sees as the Murphy Administration’s escalating threats to school districts who are not complying with the state’s new health and sexual education standards.

New Jersey’s Department of Education (NJDOE) this week reminded school district they will face “disciplinary action” if they do not implement the health and sex education standards this year. New Jersey Student Learning Standards are mandatory “and failure to comply can result in disciplinary action.”

Additionally, the NJDOE specified that parents who do not want their children to participate in these classes must write a letter to the principal explaining that the lessons contradict their personal values and beliefs.

Pennacchio took exceptions to the warning when he said “districts were repeatedly told that their local communities would get to decide how sex education is taught in their kids’ classrooms, but it’s increasingly clear that wasn’t the truth.”

The Morris County lawmaker has been one of the leading GOP critics of the new standards. Just before the school year started, he held a virtual hearing with with school board members, experts, and concerned parents for over two hours, whose objections focused on parental rights they feel is being ignored when it comes to the appropriateness of which grades to discuss such topics as gender expression and identity, sexual activity, masturbation—especially for kindergarten through sixth grade.

How much opposition has been questioned this week in a new Rutgers poll. When it comes to teaching the new standards, 51% of respondents oppose it being taught at the elementary level as compared to 46% who support it. The approvals jump as students get older—71% supportive of the subject being broached in middle school and 88% in high school.

Pollsters added that an emphasis on “age appropriateness” makes little difference; when this phrase is included in the question, similar numbers favor health and sexual education in each level of schooling as they did without the additional wording.

“According to these numbers, those who have been most vocal in New Jersey do not necessarily reflect a majority of residents’—or even parents’—views,” said Ashley Koning, an assistant research professor and director of the Eagleton Center for Public Interest Polling at Rutgers University–New Brunswick.

But that has not stopped Pennacchio from using increasingly inflammatory language for what he perceives as a “sexual indoctrination agenda.”

“It has been one lie after another,” he stated. “First, we were told it did not exist, and then we were told parents could opt out. Now we’re learning it’s being required across the curriculum at all age levels, not just in health class, and school boards are being forced to include it in subjects where parents can’t opt out.”

“The administration shouldn’t be surprised that people are pushing back against all the lies they were told.”

Pennacchio said that districts that have decided they don’t want to teach the lessons required by the new state standards deserve a “‘crisp answer” from Gov. Phil Murphy on exactly what those punishments will be.

The recent round of warnings from the NJDOE warned of potential disciplinary action to school districts that fail to implement the new sex education standards.

Pennacchio offered that while Murphy Administration officials refused to say exactly what that discipline might entail, they pointed to a law that could allow for the appointment of state monitors and the replacement of local school board members who don’t fall in line.

“Parents and local communities deserve to know if Gov. Murphy is going to send the sex police into their school districts to punish those who stand in opposition to the concerning state mandates,” claimed Pennacchio. “It’s absolutely obscene that elected local school boards that are accountable to parents, voters, and their communities could be replaced for not complying with inappropriate standards imposed by the unelected State Board of Education. If that happens, it would be an affront to all parents.”