As Jan. 6 Hearings Get Ready to Resume, Dem & Repubs are Dug In

Faith in government rebounds to 50% 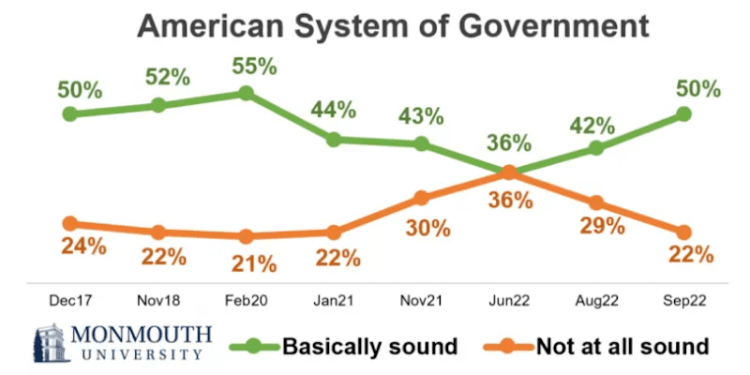 The Summer break does not appear to have changed the minds of Americans on the work of the Jan. 6 Select Committee.

In a national poll released by Monmouth University to coincide with the committee meeting scheduled for Sept. 28 that was postponed due to Hurricane Ian, trust in the bipartisan investigative panel has remained stable since public hearings started. One-third (34%) have a lot of trust that the committee is conducting a fair investigation while another 24% trust the committee’s fairness a little. Thirty nine percent do not trust it at all. As would be suspected, there is a partisan disconnect as 66% of Democrats have a lot of trust while 67% of Republicans do not.

A majority of Americans (58%) think the committee should resume public hearings, but for how long is up to debate. The Jersey Shore poll outfit reported 51% want it finished as soon as possible, 35% feel the committee should continue its investigation as long as necessary and 11% want it wrapped up in the next year.

But the biggest offshoot is respondents’ faith in our system of government has rebounded from its low point in June in part due to the work and hearing of the Jan. 6 committee. Fifty percent of Americans believe their government is basically sound, marking a return to pre-2021 levels. One in four agreed that the investigation of the U.S. Capitol riot has helped to strengthen American democracy while 35% feel the investigation has had no impact.

The “basically sound” metric stood at 44% shortly after the Jan. 6 incident and dipped to 36% in June 2022, after the House committee started holding public hearings. At the other end of the spectrum, 22% believe that the American system of government is not sound at all—down from 36% who felt this way in June and marks a return to earlier levels.

At the same time, the increased belief that the American system is sound has come among both Democrats (from 36% in June to 56% now) and Republicans (from 39% to 52%). But desp  while slightly more (34%) say it has actually helped to weaken our democracy.

“There’s certainly a correlation between the hearings kicking off and a decreased faith in the American system’s resilience, but it is not clear what caused the rebound,” said Patrick Murray, director of the independent Monmouth University Polling Institute. “It may be that Americans feel confident in our democratic processes after withstanding the test of Jan. 6, or it could simply be they are no longer thinking about those dangers without the weekly presence of televised hearings,”

As for the Jan. 6 Select Committee, party affiliation plays a role in the view of its investigation. Eighty three percent of Democrats favor resuming the hearings while 65% of Republicans oppose this. Three quarters of Republicans want the investigation concluded as soon as possible but 62% of  Democrats (62%) say it should proceed as long as needed.

“Independents say they want to see more from the committee, but also to wrap this up soon. It may be that they want to let the process play out, but feel they already have seen enough to make up their minds about what happened after the 2020 election and who is responsible,” summarized Murray.

The Shadow of Trump

When it comes to Donald Trump, his responsibility on what happened on Jan. 6 and what should be done about it remained unchanged polls taken in the middle of the summer hearings and after they ended in July. Just under 40% feel Trump was directly responsible for what happened at the U.S. Capitol that day; conversely 3 in 10 continue to believe that President Joe Biden’s 2020 election victory was fraudulent.

The current poll finds that 41% of Americans—including 78% of Democrats—favor charging Trump with crimes related to his involvement in the Jan. 6 incident while 34% are opposed— including 71% of Republicans. Another 25% are unsure.

The Big Lie Rolls On

The public is divided on whether having Trump stand trial will help (33%) or hurt (38%) the stability of our political system, while another 25% say it would have no impact on the country overall.

In related findings, 61% of the public feels that members of Congress who assisted the Jan. 6 planners should be removed from office with a sharp divide by political party—88% of Democrats say yes compared with 37% of Republicans.

Belief in “The Big Lie” has remained steady since the November 2020 election—29% continue to hold the erroneous belief that Biden only won due to voter fraud driven by 61% of Republicans. This number has hovered in a narrow range between 29% and 32% since the presidential election.