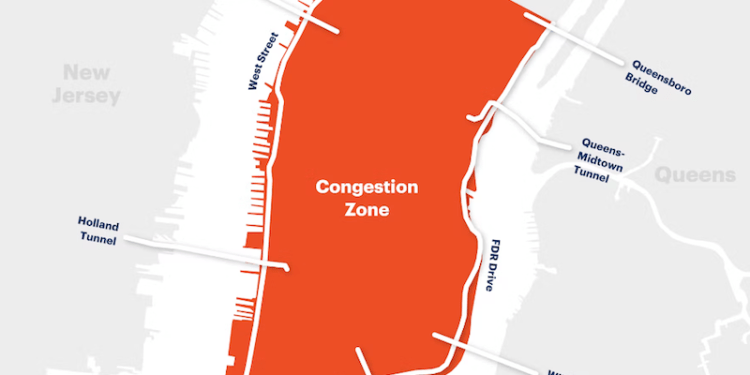 The governor wasted little time in leveling his criticism directly at an Environmental Assessment (EA) study targeting the Garden State, with a massive draconian toll tax, aimed at New Jersey motorists when he stated “given the outstanding concerns and lack of analysis produced on how this program will affect New Jersey, the State requests completion of an Environmental Impact Statement.”

Under the proposal devised by the EA committee, New York’s congestion tax plan could cost every New Jersey driver who works in the Empire State and commutes into the city’s business district as much as $23 dollars daily. New York Gov. Kathy Hochul has backed the plan.

However, no final decision has yet been made regarding a tax credit for New Jersey motorist’s crossing over the George Washington Bridge. Not providing a toll credit for the GW Bridge commuters would constitute a “double taxation,” according to Murphy.

The governor also isn’t convinced that the environmental study has taken every viable scenario into consideration regarding the imposition of an additional tax on New Jersey motorists. In his Sept. 23 letter, the governor clearly outlined his concerns to the Federal Highway Administration.

“While New Jersey is conceptually open to traditional congestion pricing that makes traffic reduction its main goal, the program as proposed has revenue production as a primary goal and the EA released outlines scenarios that cause concern among New Jersey commuters and agencies,” wrote Murphy. “There is a high degree of uncertainty and potential for significant impact associated with (the program) as outlined. As such, an Environmental Impact Statement should be conducted.”

Earlier this month, when asked by a reporter about the congestion tax scheme imposed on New Jersey motorists, the Governor caustically remarked; “In theory, it’s a good mitigation measure, but it’s an idea whose time has not come.”

According to the plan, a “congestion toll” would be charged to all motorists entering Manhattan’s Central Business District (south of 60th Street). The funds would supposedly be earmarked for both the Metropolitan Transportation Authority (MTA), along with reducing traffic congestion and air pollution.

During a recent MTA virtual public hearing, Manhattan Chamber of Commerce CEO and President Jessica Walker echoed Murphy’s concerns regarding the congestion toll tax, reminding those in attendance of the slow recovery taking place within Manhattan’s business district, due to COVID, and perhaps a sound reason to delay moving forward on the proposed hike.

“We have serious questions on the timing. The Central Business District was hit hard,” said Walker. “Many economists feel New York City won’t be back until 2025. We need to slow this down.”

The plan for a congestion toll tax was first approved back in 2019; however because of unforeseen delays, which included the devastating pandemic, the rollout was pushed back. At the time, financial pundits estimated that the new tax would bring in about $1 billion annually in additional revenues. The funds reportedly would be earmarked for improvements to the MTA’s subway and bus systems.

However, according to Gov. Murphy public hearings should have been held as part of the EA’s development “not after the fact. Due to the lack of public outreach, few New Jerseyans had opportunity to comment on the EA.”

“New Jersey residents have the unfortunate distinction of being directly impacted by the  (MTA) plan without any representation in the New York State Legislature, the MTA Board, or the Traffic Mobility Review Board and will not receive any direct benefit from the revenue that the MTA will raise as a stated goal,” wrote Murphy in his letter that included technical comments against the plan from New Jersey Transit, New Jersey Department of Transportation, and the New Jersey Turnpike Authority.

Murphy continued; ‘While we share a goal of cleaner air and greater public transit investment, the burden must be paid by those who are able and willing, not by those who can least afford it, who have no alternatives, and who did not have a voice in the mater. We must get congestion pricing right.”