The thread line of threats turning to violence continues 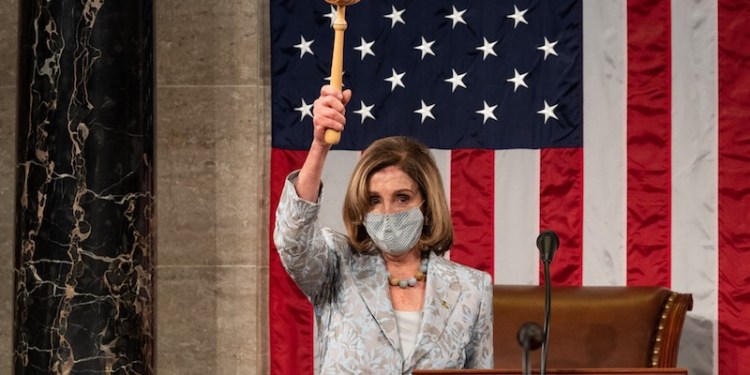 The headline is literal, not theoretical. The man, and it is our policy to not name terrorists who commit these actions to give them the fame they desire, broke into the home of Speaker of the House Nancy Pelosi and her husband Paul in order to cause bodily harm to the leading Democrat in the House.

The intruder repeatedly shouted, “Where is Nancy? Where is Nancy?” after the break in, disputing the notion that this was just a break in but an attempt attack on a politician.

San Francisco police arrived after Paul Pelosi called 911 from a bathroom after the intruder broke through a back door of the home. He had a coded conversation with a police dispatcher, who recognized the situation and dispatched a rapid police response.

The police would witness the terrorist rip a hammer out of Paul Pelosi’s grip and “violently assaulted him with it,” resulting in surgery for a skull fracture and serious injuries to his hands and right arm. He is expected to make a full recovery.

A person would have to go out of their way to not see a through line of political violence that has increased since 2016. It started with Rep. Steve Scalise of Louisiana, then the third-ranking Republican, being shot and gravely wounded in June 2017 at a congressional baseball practice by a man with a grudge against Republicans.

It was followed just months later by the Charlottesville car attack when a White supremacist deliberately drove his car into a crowd of people peacefully protesting the Unite the Right rally, killing one person. Days after is when President Donald Trump offered that there were “good people on both sides.”

The murder of George Floyd and the Black Lives Matter protests would lead to violence in the streets across the U.S, culminating with a 17 year old from Illinois shooting three men, two fatally, during the civil unrest in Kenosha, WI, in August 2020. Little over a year later, a jury found the shooter not guilty of murder and other charges after he testified that he acted in self-defense and, in the process, making him a celebrity of conservatives in some circles.

That all led up to Jan. 6, where a mob of supporters of Trump—including the right militia Proud Boys who he told to “stand by” during a Presidential debate—were urged by the then-President to descend on the U.S. Capitol to disrupt the peaceful transfer of power. The Jan. 6 House Select committee has shown the involvement of those in the Trump orbit in creating the atmosphere that would lead to the action of that day, including those looking for congressional leaders such as Speaker Pelosi, and their unwillingness to move aggressively to stop it.

As of this weekend, nearly a 1,000 people have been arrested and charged with the FBI looking for more—including the suspect who placed pipe bombs at both the Democratic and Republican National Committees in Washington, D.C. the night before.

And this Summer, the FBI arrested a man who prosecutors say traveled to the home of U.S. Supreme Court Justice Brett Kavanaugh with a pistol, extra ammunition, a tactical knife and other gear and had  looked up terms like “most effective place to stab someone” and “quietest semi auto rifle.”

The Department of Homeland Security has warned that the United States faces a growing danger from “violent domestic extremists” emboldened by the Jan. 6 attack, and motivated by anger over “the Presidential transition, as well as other perceived grievances fueled by false narratives.”

The number of recorded threats against members of Congress increased more than tenfold in the five years after Trump was elected in 2016, according to figures from the Capitol Police, with more than 9,625 threats reported in 2021 alone.

The time is well past that politicians both be held accountable for the language they use and how they confront the extremists of their party. We will be blunt here—while we showed this is an issue for both sides, the rhetoric and imagery of wanting to punish the opposition is one sided, especially online.

Just the week before the Pelosi attack, Trump suggested that the best way to get reporters to reveal their confidential sources is to lock them up in prison where they can be raped by other inmates. He was cheered by his audience.

And no Congressional GOP candidate in North Jersey rejected the comments by the leader of the Republican Party or offered a comment decrying the attack on Friday for the person third in line for the presidency. Take a moment to let that soak in—the leader of the Republican party advocating for the sexual assault of one of his fellow citizens for just doing their job and it barely raises a mention.

There are Republicans who did and they should be applauded. At the top of the lists are former Vice President Mike Pence and Sen. Ben Sasse (R-NE).

“As we wait to hear more, every single American needs to be lowering the temperature. This is increasingly obvious: Disturbed individuals easily succumb to conspiracy theories and rage — the consequences are bloody and un-American,” tweeted Sasse.

It is really that simple. During political campaigns and debates, candidates and lawmakers should attack the issues, offer your plan for a better future, raise questions about your opponent—all fair game. But the continued imagery throughout races in the U.S. that places Pelosi in literal crosshairs should be stopped.

But when it steps over the line, it not only needs to be called out but rejected by those in their party, Republican or Democrat. And those spewing this hate should be removed from leadership. Do we feel this is a much greater problem in the Republican Party than the Democratic Party? Yes we do. But as we showed above, we see that extremists in both parties are acting in unacceptable violent ways in the last five years.

This is not an issue of cancel culture, it is an issue of accountability. And we do not have enough of it from our political leaders today.