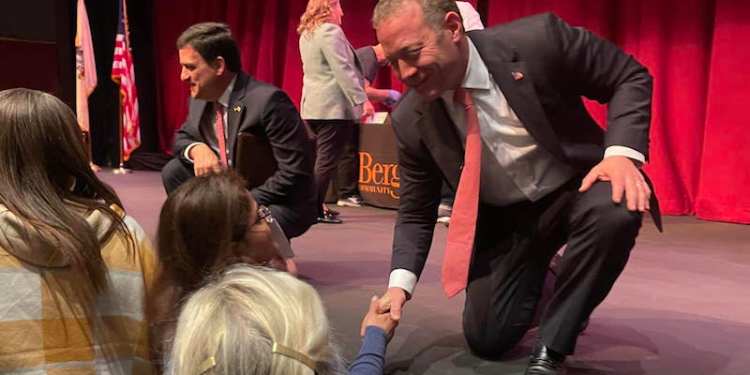 The only time the two candidates faced off this election cycle, Rep. Josh Gottheimer and GOP nominee Frank Pallotta were part of a forum held at Bergen Community College last week.

Gottheimer and Pallotta, sharing the stage with Trevor James Ferringo of Together We Stand and Louis Vellucci of American Values, were part of the League of Women Voters of Bergen County forum Oct. 27. Among the subjects debated, abortions, the criminal justice system, foreign policy and immigration drew the biggest contrasts and clashes on the candidates positions.

Unsurprisingly, a woman’s right to choose brought about the biggest clash in policy. Pallotta stated he is a “pro-life candidate who believed in the sanctity of life.”

Pallotta pledged his support for legislation being offered by Rep. Chris Smith (R-NJ) that would ban abortions nationwide after 21 weeks and that we was for exceptions for health of the mother, incest and rape.

“We need to find a common sense solution to move forward and to stop the divisiveness,” said Pallotta. “But the decision this Summer was the right decision.”

Ban with No Exceptions

Gottheimer argued that Pallotta’s backing of the Human Life Amendment contradicts his claims that he supports the exemptions in addition to criminalizing in vitro fertilization (IVF) treatments.

“In a candidate profile, Frank said ‘life begins at conception. I am pro-life and I support the Human Life Admanenet’ that creates a national abortion ban with no expectations,” countered Gottheimer. “You said you supported that amendment last week.”

Gottheimer said the Supreme Court decision “devastatingly” overturned a woman’s right to choose and “is a horrific breach of personal privacy and freedom.” With the court allowing states to make their own laws, the Congressman noted 22 million have already lost their right to choose.

“We must oppose any attempt by those in Washington or wearing a robe around the county to roll back the clock and stand between a woman and her doctor and her faith when making a personal health care decision,” he said. “Clearly there is a difference between me and my opponent here.”

A sharp distinction in gun laws was on display as well. Gottheimer highlighted the passage of gun safety laws passed by Congress this year that included red flag laws to keep guns out of the hands of the mentally ill and domestic abusers that had the support of law enforcement.

“I support people’s right to hunt and protect themselves,“ he said. “I just do not believe that anyone needs a weapon of war to do so. Every mom and dad are sick and tired of hearing about another tragedy, another school shooting, another senseless death—all from gun violence.”

Pallotta disputed the notion that more laws and the attempt to take away guns would stop gun violence and mass shootings. He said the primary cause of these incidents was mental illness and breakdown in communications within law enforcement agencies.

“Recent mass shootings are because these breaches were broken, breakdown in the process,” he said. “I am not for red flag laws, I am all for finding what the red flags are and identifying and attacking those red flags. But the red flags laws as written don’t do anything but create more mandates, more government overreach.”

The breakdown in communication by law enforcement was cited by the GOP nominee when the subject of Jan. 6 was debated.

“It sounds like a lot of people knew both in the government and the private sector that this was going to happen,” including the U.S. Capitol police, he offered.

Pallotta stated that anybody who broke the law on Jan. 6 should be prosecuted to the fullest extent of the law. Gottheimer has continually cited Pallotta defense in a 2020 debate of the Oath Keepers during the campaign, an issue Pallotta took issue with.

“Let me be clear, this was not just the Oath Keepers, just Proud Boys, whatever other names Josh decides he wants to throw at people,” said the GOP nominee. “These were people who were incited for whatever reason they had and they pushed and it was the wrong thing to do. But we must be clear that we don’t point fingers, we don’t start calling people names simply because it fits your narrative today.”

Gottheimer responded there’s “literally a trial going on right now for Oath Keepers who attacked the United State Capitol” as he recounted the events of that day.

“I saw it with my own eyes, there were guns drawn by our police who were defending themselves as they were attacked. I’ve sat with those police officers that were attacked that day,” said the Congressman at his most animated during the forum. “I get fired up about it because…I was in the gallery that day with a gas mask and there is no other way to look at it as an attack on our country and our democracy.”

“We know that there were people involved who attacked police, including the Oath Keepers, the Proud Boys, the Three Percenters, who only didn’t respect our country but attacked our country that day.  We must do everything we can to prevent an attack like that on our country going forward.”

Both candidates offered that the economy was a pressing issue for North Jersey residents. Gottheimer went over his record and initiatives that include clawing back more federal dollars to the district as a way to keep property taxes and costs down for local municipalities as well as his key role in getting the Bipartisan Infrastructure Bill passed that will create jobs and repair roads and bridges.

Pallotta focused on the “skyrocketing” interest rates, how to make housing more affordable in the district and a solution needed for student debt, but not the one offered by President Joe Biden.

“This state has lagged in every economic metric imaginable, in economic growth, jobs, business environment because of the leadership we have. This has got to stop,” he said.

The Mahwah businessman focused on leadership and the lack of it from the Biden Administration on subjects in foreign policy, connecting President Biden’s withdrawal from Afghanistan as opening the door for Russia to invade Ukraine.

“When (Russian President Vladimir) Putin looked at the weakness of this country, the weakness of how that withdrawal was handled…that let people like Putin and (Chinese President) Xi know they can take advantage of us,” he said. “We can not be the police force for the world…we will protect our sovereignty first.”

The Democratic Congressman said it was incumbent for the U.S. to protect an democratic ally such as Ukraine—especially with Putin’s plan to continue and threaten NATO allies— and the biggest threat to America is China and the trimutive of China, Russia and Iran must be confronted.

“China believes that only their way can succeed, and they’re infiltrating our country in every way, is to tear us apart,” he said. “We must protect our country, and that means standing up to Russia, standing up to Iran and making sure we do everything we can to show that our democracy and our military has the strength to do that.”

The issue of immigration brought common ground as both candidates agreed reform is needed that includes a pathway to citizenship for Dreamers and the Southern Border needed to be enforced. But the priority differed for the two candidates.

Pallotta said immigration reform could be not be accomplished due to the five million illegal immigrants that have been “pouring over our borders” since President Biden took office.

Gottheimer said Ensuring citizenship for Dreamers need to be part of any comprehensive immigration reform as he noted “they have been here most of their lives and serve in the military as well as police and teachers. They’re part of our communities, they pay taxes…What has been key to our economic growth through the generations has been legal immigration policy that continues to be supported by businesses of all sizes today.”

Additionally, Pallotta coupled the immigration issue to the rising crime in the district.

“They bring about drugs, they bring about human trafficking,” he said. “The catch and release, the cashless bail system— that’s caused our crime rate to skyrocket here.”

The GOP candidate rejected the premise of systemic racial injustice, insted seemingly blaming the policies of the government for driving the issue because “racism sells.”

“Why do we know it? Because kids don’t know. Kids play with other kids, it doesn’t matter to them,” Pallotta explained. “The government and other people separate us. The labels that are put on us…racism exists when we separate people, when we tell them who’s bad and who’s not bad simply because of how they think we act.”

Gottheimer reminded Pallotta that the architect of bail reform in New Jersey was actually Chris Christie who signed it into law.

“We must enforce the laws on the books,” said the Wyckoff lawmaker. “We need change that gives judges more discretion for repeat offenders and who pose a risk to our communities. That’s why I believe we need to invest in law enforcement.”

The matchup between Gottheimer and Pallotta is a rematch from 2020. Gottheimer won the race by six percentage points. The district was redrawn in 2021, increasing the foothold in Bergen County while dropping towns in Warren County.

Credit Suisse Settles for $495 Million in Principle to Resolve Allegations of Fraud, Deceit

2022 Elections: New Jerseyans Don’t Have Much Trust in Supreme Court

2022 Elections: New Jerseyans Don’t Have Much Trust in Supreme Court