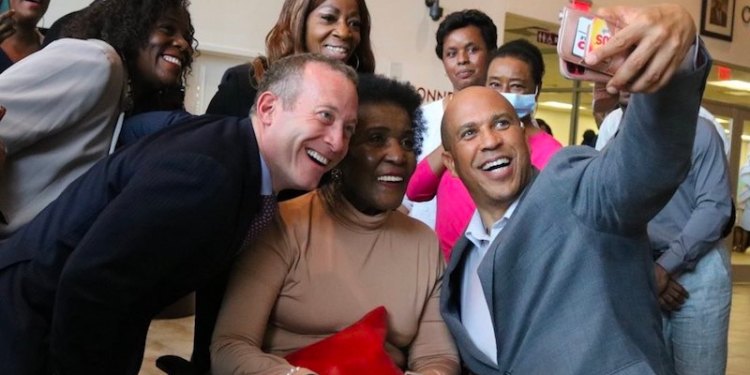 Candidates, and their high profile surrogates including a former President, made one last push to get out the vote over the weeknd for the crucial House midterm elections.

Rep. Josh Gottheimer was joined in Paramus on Nov. 5 by his former boss, Bill Clinton as he attempts to secure a fourth term for the North Jersey district made up of Bergen, Passaic and Sussex counties.

Gottheimer said he learned the lesson from Clinton that “working together across party lines isn’t a weakness, but a strength to be harnessed.” The Bergen County lawmaker then listed the bipartisan accomplishments in the last two years of this Congress— infrastructure, gun safety bill, a bill to care for veterans exposed to toxic burn pits, the CHIPS Acts and the Invest to Protect police funding bill  in making his case to voters.

“Simply put: this election here in the Fifth is about commonsense problem solving versus extremism,” said Gottheimer. “And we will prevail — because we’ve got the grit and the guts, and we know that our children’s futures are literally on the line.”

The former president offered a broader view of this election as a chance to stop rewarding Republicans for doing the wrong thing.

“We have got to stop rewarding deliberate, destructive, divisive misconduct,” he said. “When we do, we can have an America we can share. We have got to stand up against thisWe can’t let them take America down this path.”

Clinton warned that Republicans may cut Social Security and Medicare and how Donald Trump framed immigration as just an inability to secure the Southern border without offering a comprehensive reform proposal.

“(Trump) made a lot of fuss about building a wall (but) never built something to enforce our laws. Because he needs you to be angry and miserable,” Clinton said. “Because then you don’t think very well.”

To counter the appearance by Clinton, GOP nominee Frank Pallotta launched an endorsement from one of Clinton’s most ardent detractors—former Speaker of the House Newt Gingrich.

On Pallotta’s Facebook page, a video of Gingrich speaking about the GOP nominee is up with the statement that supporting Pallotta is “helping America” and criticizing Gottheimer’s voting record on issues such as the economy and immigration.

“Frank Pallotta is a businessman…in touch with the daily challenges of earning a living, hiring people, and making America productive,” said Gingrich. “This is one of the key races to getting a republican majority, making a real commitment to America.”

Pallotta on Monday announced that he was being endorsed by former Vice President Mike Pence as well.

Booker on the Trail

Sen. Cory Booker, who has been on the campaign trail for numerous Democrats across the U.S. this year, appeared at Community Baptist Church of Englewood with Gottheimer on Sunday. Booker called the Wyckoff lawmaker the “James Brown of the United States House of Representatives because…this man never stops.”

During an appearance on a Sunday morning news show, Booker pushed back on the narrative that his party is not focused on the everyday concerns of Americans.

“Every single one of them is talking about kitchen table issues,” Booker said. “Their closing argument is: When this country is going through tough times, whether it’s a pandemic or inflation rising, who is really going to have your family’s back?”

“Candidates are speaking towards the pocketbooks of this country and reminding people about what Donald Trump’s agenda was when he had the reins, not just economic policy that favored the rich but also things that undermined our very fundamental beliefs as a democracy.”

In Morris, Essex and Passaic counties, Rep. Mikie Sherrill and Republican nominee Paul DeGroot held rallies to get the vote out for the 11th District.

“The people of Morris County are going to save the nation,” Sherrill said, who campaigned with Booker and Gov. Phil Murphy over the weekend. “Is this race going to be close? You know, it’s hard to say, I never take anything for granted.”

Murphy warned of a House in which Kevin McCarthy is Speaker, saying “These guys are on the wrong side of history.”

DeGroot continued his campaign focused on inflation and crime, offering that “it’s time for a change, and that change comes from me.”

DeGroot received the endorsement of Libertarian Party candidate Joseph Biasco. A former Cliffside Park police captain who lives in Lincoln Park, Biasco campaign had focused on the issue of immigration and crime.

“This Election Day, we have a once in a lifetime opportunity to wipe out the radical left as we know it. But to do so, we need all hands on deck,” Biasco said, who during the campaign called Joe Biden an “illegitimate” president, falsely stating that Trump was the winner of the 2020 presidential election and that COVID-19 was a conspiracy.

“After meeting with Paul and his family, it was easy to see that he was a man of conviction and honesty. And unlike his opponent, Paul is not there for himself. He’s there for you.”

Malinowski, Kean Out in the 7th

In the hotly contested 7th, both candidates made stops at train stations to meet voters and went door-to-door to press the case for their candidacy over the weekend.

“The road to a Republican House majority runs through Morris County,” Kean said to those in attendance, saying that his focus will be breaking the back of inflation if elected.

Besides his get out the vote efforts, Rep. Tom Malinowski pushed for Kean to offer a comment amid reports Trump was set to announce his 2024 Presidential election bid in the weeks after Election Day. Malinowski attacked Kean Jr. for supporting Trump in 2020 and dodging the question if he is unfit for office—a statement Tom Sr. has made.

“Enough with the cowardice and silence,” said Malinowski. “The voters of New Jersey’s 7th Congressional District deserve to know: Does Tom Kean Jr. still have Trump’s back no matter what?”