Codey: Hugin Should Resign After Using Expletive to Describe Sherrill 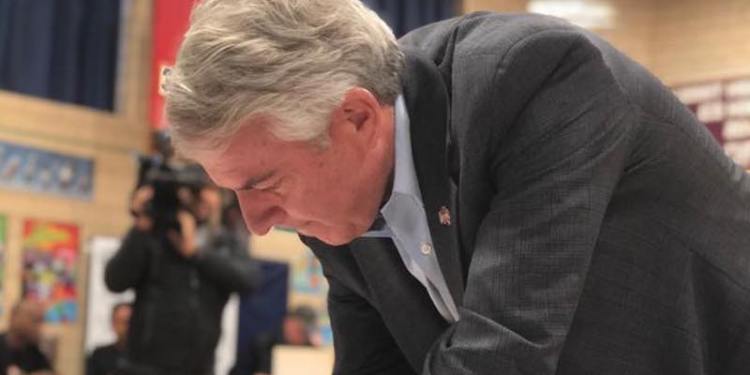 State Sen. Richard Codey (D-27)  called for the resignation of Bob Hugin as chairman of the State Republican Party over his profane comments about Rep. Mikie Sherrill following her successful reelection.

Hugin called Sherrill a “piece of shit congresswoman” on the podium of an election night gathering on her way to a 17 point victory over her Republican opponent, Paul DeGroot.

Hugin said he got caught up in the heat of the moment on election night and sought out out reporters that night to walk back his comments.

“I immediately apologized for some inappropriate and unintended words that I used during my remarks,” Hugin told the New Jersey Globe the next day. “Though unplanned, there is no excuse. I apologize.”

But the former governor of New Jersey believes that the “personally derogatory comments” is a “stain” on New Jersey that can only be remedied by Hugin stepping down from being the leader of the Republicans in New Jersey.

“It’s an insult to all the voters in the 11th District,” said Codey. “The language and the attitude are classless and inexcusable. Chairman Hugin should resign immediately from his position as the Republican Party’s leader. It’s not the type of discourse that should be tolerated in New Jersey – even in defeat.”

Codey noted this is not the first time Hugin’s is being called on the carpet for rhetorical abuse. While attending Princeton, Hugin made threatening statements about his gay classmates, saying that if a fellow member of the exclusive Tiger Club he belonged to were found to be gay “they wouldn’t last long.”

In later years, he led the effort to prevent women from belonging to the club and worked to roll back anti-discrimination protections for LGBTQ students.

When the Tiger Club was sued for bias against women, Hugin, then the club’s president, labeled the anti-discrimination law “politically correct fascism.”

“Mikie Sherrill has served her country and her constituents with selfless dignity,” said Codey. “She deserves the respect of Democrats and Republicans alike. Partisan politics can be competitive, but it should not be profane or personally derogatory. We should be better than that.”

“The insult that NJ State GOP Chairman Bob Hugin spit at our Congresswoman Mikie Sherrill on Election night was not just a disgrace but personally disqualifying for him on so many levels,” said Miggins. “There is no place in a civil society where when entrusted with responsibility you can exhibit such uncivil and misogynistic behavior and not expect to be held accountable.”

Miggins, the only woman mayor in Essex County, said women deserve to be treated with respect and not as punching bags for someone’s political gain or as an excuse for disappointment and defeat.

“Republican Chairman Hugin, speaking for his defeated candidate, owed our Congresswoman Sherrill a magnanimous salute, a gracious nod for her stellar accomplishments and for her service to our state and country,” said Miggins. “Certainly, she deserves better than his vile ‘locker room’ remarks.”