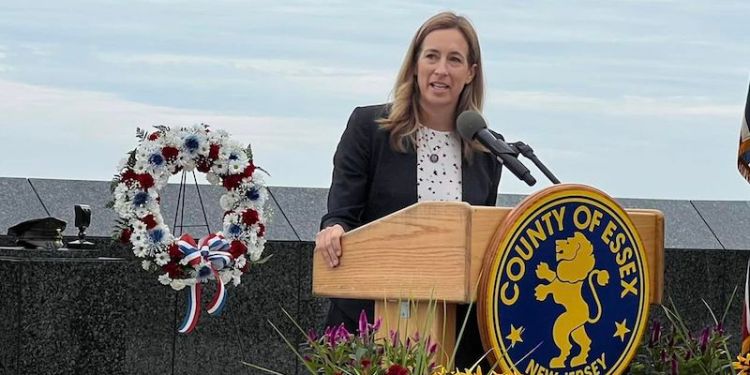 It is no surprise after her nearly 20 point win in a district national Republicans had targeted that Rep. Mikie Sherrill’s name would start to be connected with an increased role within the Democratic party.

But Sherrill this week put an end to speculation that would have her chair the Democratic Congressional Campaign Committee (DCCC), the campaign arm of House Dems that is responsible for recruiting candidates, raising funds, and organizing the campaign for congressional districts.

“While I was honored to have my colleagues approach me, I am not running for chair of the DCCC,” Sherrill said in a statement Nov. 16.

The statement was issued in response to a published report that Sherrill was “being pushed to run for Democratic Congressional Campaign Committee Chair.”

“Sherrill, who represents the area around Montclair, won reelection by a whopping 17 points, somehow benefiting from redistricting that wasn’t supposed to work in her favor,” wrote Tara Palmeri in Puck  Nov. 14. “This puts her in a less precarious position for the next cycle while also giving her some insight, and perhaps empathy, into the vulnerabilities of swing-seat Democrats. Likely leader Hakeem Jeffries would probably support the move, even though it might drive the progressive caucus crazy.”

The position of DCCC chair opened after current chair Rep. Sean Patrick Maloney lost his New York House seat to Republican Mike Lawler. The focus on Sherrill comes in part as the party looks for centrist in leadership positions, and how the Navy veteran and former prosecutor has won the 11th Congressional District in the last three elections after being in Republican control for more than 30 years.

While the Sherrill campaign did not make any public comments after the initial report, the lack of an official denial led to speculation that the Montclair resident was considering the position.

In declining the chair, Sherrill stated she knows “how critical the DCCC is to recapturing the House majority in 2024. As a former red-to-blue candidate and Frontline member, I also know how important it is to understand the experiences of Frontline members and I stand ready to help and support our next chair.”

Notably, the congresswoman did not address the speculation that any decision she made would factor in a race for governor as Gov. Phil Murphy can not run again due to term limits. GOP nominee Paul DeGroot even brought up the possibility that Sherrill had her eye on a higher office during their debates this year.

While the governor’s race is three election cycles away in New Jersey—Assembly and State Senate elections will be held in 2023 and a Presidential Campaign, the Senate seat Sen. Bob Menendez currently and all House members being on the ballot in 2024—lawmakers on both sides of the aisle have begun to jockey for position to be their party’s nominee to be governor in 2025.

Among those mentioned on the Democratic side include former State Senate President Steve Sweeney, Jersey City Mayor Steve Fulop, Newark Mayor Ras Baraka, and Lt. Gov. Sheila Oliver. For Republicans, 2021 nominee Jack M. Ciattarelli has already announced that he will again seek the nomination with speculation revolving around State Sens. Jon Bramnick (R-21) and Mike Testa (R-1) among others.

There is one prominent Democrat who has already ruled himself out—Sen. Cory Booker. Booker recently stated that “I loved being an executive as (Newark) mayor…seeing what an executive can really do to move a city or a state. The governor’s job is very attractive to me but I love being New Jersey’s senator. I have been flattered by people asking me if I will run. But I have no intention of doing that.”

North Jersey Reaction to Nancy Pelosi Stepping Down from Leadership

North Jersey Reaction to Nancy Pelosi Stepping Down from Leadership