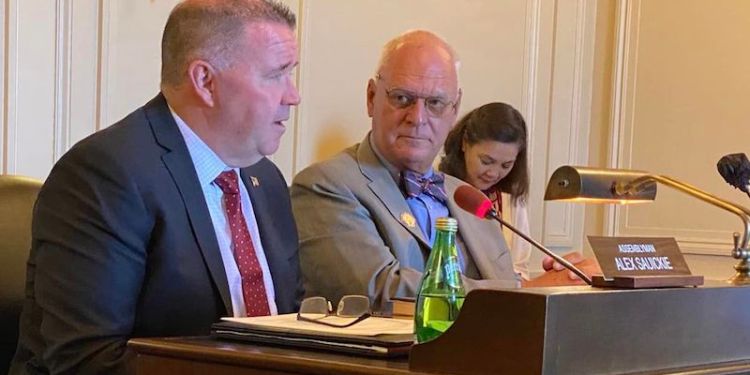 The legislation, put forward by Assemblyman Alex Sauickie (R-12), would empower parents to inform future instruction by allowing them to serve on advisory boards.

“This bill is about shifting the power to the local level so that parents, teachers, and boards of education are working together to develop a transparent and age-appropriate health and education curriculum,” said Sauickie, who in September was sworn into the Assembly after the passing of Ron Dancer.

Under the legislation, the new standards would be rescinded, and the state board would be prohibited from mandating similar curriculum requirements.

“Unaccountable bureaucrats creating inappropriate learning standards and forcing their agenda on children and schools is an assault on common sense, our local educators and home rule,” said Sauickie.

Prior GOP Attacks on the Standards

The proposed legislation is a response to the health and sex education standards that the New Jersey Department of Education adopted in June 2020. Republican lawmakers contend that the standards delve into a range of sex and sexuality-related topics before children reach appropriate ages for learning about them. Additionally, they say that state officials adopted the standards at a time when public focus was diverted to the coronavirus pandemic and thus the standards never received full scrutiny.

New health education curriculum standards would be adopted by local school boards within 180 days of the bill’s enactment.

“State officials have threatened school districts that fail to teach their appalling lesson plans. They’re aiming to divide parents and children, and schools and communities. I’m committed to putting a stop to it,” Sauickie continued.

State GOP lawmakers have framed the issues under a parental rights banner, including holding a two-hour virtual hearing on the subject earlier this year with school board members and parents against the new standards participating as well as supporting local school board candidates who ran on the issue.

“Parents are angry. They feel ignored, helpless, and frustrated,” said State Sen. Kristin Corrado (R-40) earlier this year. “With parenting comes responsibilities, and Trenton bureaucrats are usurping that authority and relegating Moms and Dads to spectators in the raising of their children. The role of parents is sacrosanct, and they should have a say in every aspect of the education of their children.”

State Sen. Joe Pennacchio (R-24) added “The (Murphy) Administration wants to remove parents from the equation…There is no mechanism in the law that allows parents of 4- and 5-year-olds to opt out of sexual identity and orientation lessons. At best, there is a lot of ambiguity and confusion about these new rules and what they mean for our children, and that’s by design.”

“Parents don’t really have the final say on what their kids are taught when the Murphy administration says schools will be penalized for not teaching the new sex education requirements imposed by unelected Trenton bureaucrats,” said Oroho at a time.

Split on the New Standards

A Rutgers-Eagleton poll published in September found a nearly-even split among Garden State residents regarding the new sexual education standards, with 51% opposing it being taught at the elementary school level.

Support did grow for the new standards depending on age, however, with 71% supportive of these standards for middle schoolers and 88% for high schoolers.

“This measure is the opposite of a one-size-fits-all curriculum mandate, and it requires more transparency in the process. Community members are invested in the success of schools and students and should have the opportunity to be involved,” Sauickie added.