Dems say the bill is about gun safety, GOP offer bill is unconstitutional 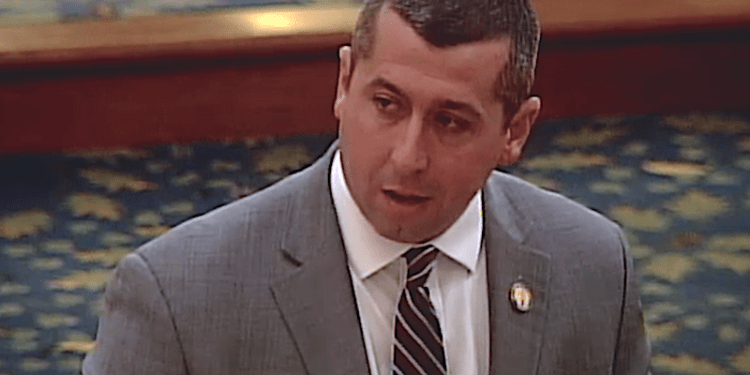 After a ruckus 90 minute debate earlier this week, the Assembly passed a new gun control bill that Republicans said was unnecessary and would fail in courts.

The proposal (A4769) passed on Nov. 21 would require gun owners in New Jersey seeking to obtain a carry permit to purchase liability insurance and take training courses, while prohibiting people from carrying firearms in a wide range of “sensitive places” in the state, including schools, public parks, courthouses, and bars.

The bill was written by Democrats in response to the Supreme Court’s  decision in New York State Rifle & Pistol Association Inc. v. Bruen this past Spring that struck down New Jersey’s similar system for limiting who can have a license to carry a gun outside their home. It passed the lower chamber by a 42-29 vote, just one vote above what is needed to clear the Assembly.

Assemblyman Joe Danielsen (D-17) said the legislation was being offered after speaking to stakeholders, including law enforcement agencies, on the best way to craft the bill and that “because of Bruen, more New Jerseyans will die as a result of gun violence.”

“I have made many changes to this bill as a result of those conversations,” Danielsen said. “The question before us now is how many will die? We cannot wait until after the loss of lives to take action to protect residents of New Jersey. As a legislator, I cannot stand for that.”

During floor debate, Republicans ridiculed the bill as not being focused on where the problems really lie, the constitutionality of the bill and just a continuation of what the see as an attack on the Second Admentant.

Three of the strongest opponents of the bill were North Jersey Assembly members—Robert Auth (R-39), Brian Bergen (R-25), and Hal Wirths (R-24)—who personalized the attack at time at Danielsen

“I think you literally have a solution looking for a problem,” said Wirths. “We have the strictest gun laws in the state of New Jersey. Even after the Supreme Court ruling, if we just simply follow those rules, we have the best gun laws–and some of us would even argue too strict.”

The Sussex County lawmaker argued that the Dems focus on gun laws would be better spent on the ones who are committing crimes.

“But no, we don’t want to target them. We want to target the most law-abiding citizens who are well-trained, go through police background checks,” said Wirths. “Like I said since day one that I’ve been here, the real goal among many of you, quite frankly, is to take the guns away. You say you’re pro-Second Amendment. This is really about a distress or hatred towards firearms.”

Auth offered the bill would make victims of domestic violence less safe and endanger members of the LGBTQ+ community by not allowing them to defend themselves with firearms. He noted that a gay man was one of the original plaintiffs in the District of Columbia v Heller Supreme Court case.

“I really feel that if we’re going to take a person’s right to defend themselves away from them, we’re doing such a disservice to the citizenry of our state,” said Auth. “We really need to contemplate the deleterious effects that will have, and the emboldenment of what criminals will do, knowing that they have the soft underbelly of New Jersey at their hands.”

Assemblywoman Mila Jasey (D-27), who characterized gun violence in the U.S. as a “public health emergency,” noted the Assembly’s vote came after five people were killed and at least 25 others were injured during a shooting at a Colorado Springs LGBTQ nightclub the weekend before and a week after a gunman killed three football players at the University of Virginia.

“We have all seen the catastrophic consequences when these weapons are unleashed in our schools, houses of worship, movie theaters, and other public places when access is not restricted,” Jasey said.

The most contentious exchanges of the day were between Bergen and Danielsen, centered on arguments on whether the Jersey law would hold up in court after the Supreme Court’s June ruling—so heated at one point that a hot mic caught Bergen saying “God, he’s such an asshole” and doubling down on social media shortly afterwards.

“It’s the constitutional part that you left out,” Bergen stated. “It was written poorly, it was reviewed poorly, and it’s nothing but cowardice from those of you on that side who know this is a bad thing, who refuse to have the intestinal fortitude to stand up and do the right thing.”

Bergen opined that people want the permits not so they “can run around like the Wild Wild West” but that current laws are “so ridiculous, that every time you get in the car to go to a range, you think you might accidentally commit a crime.”

“Having a concealed carry permit a lot of times you will alleviate that because you don’t have to worry about all the stupid laws that New Jersey has,” said the Morris County lawmaker.

Danielsen replied that he sought counsel from Republicans, the NRA, the Second Amendment Society, the Attorney General’s office, and “an uncountable” number of attorneys that the law as written will be able to withstand judicial review.

“This bill is a public safety measure that considers and balances the constitutional rights of gun owners,” he said. “Yes, New York’s law has been challenged, and that challenge is working its way through the courts. No one can clearly say how the judges in the Third Circuit will interpret Bruen as applied to this law. It would be premature for anyone to say that they could with any degree of certainty.”

Democrats united the bill has the support of several New Jersey police departments and law enforcement unions, including the New Jersey State PBA, the Fraternal Order of Police, and the Former Troopers Association.

On to State Senate

“It is not unconstitutional to try to figure out what the ramifications of this should be and what the regulations should be,” said Assembly Majority Leader Lou Greenwald (D-6). “We have a right to try to protect the public safety and at the same time, walk the line to protect the Second Amendment.”

The bill now goes to the Senate with a seemingly narrow window to be passed by the end of the year. The current calendar has the upper chamber only meeting two more times this year: Dec. 5, where the State Senate budget committee would take up the bill and a full State Senate voting session on Dec. 22.