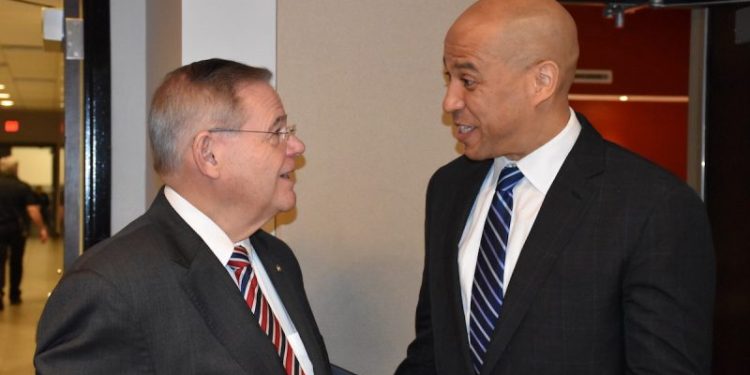 Sen. Cory Booker registered the 60th vote on the Senate floor Nov. 29 to ensure the passage of the Respect for Marriage Act, a bill to codify the ability of same-sex and interracial couples to get married and requires states to recognize the marriages.

The bill passed the Congressional upper chamber by a 61 to 36 vote. A different bill passed the House earlier this year, with nearly 50 Republicans voting yes. The legislation must now win final approval by the House in a vote expected as soon as next week, which would clear it for President Joe Biden to sign before the end of the year.

The vote on the legislation had been delayed until after the midterm election by request of Sens. Tammy Baldwin (D-WI) and Susan Collins (R-ME) to ensure its passage. Booker praised Baldwin for leading a bipartisan group of Senators “with urgency to secure these protections for marriages across the nation.”

“In Congress, there are moments when you can feel the arc of the moral universe bending towards justice in real time. Today’s vote to provide federal recognition of same-sex and interracial marriage as the law of the land was one of those moments,” said Booker. ”Equality should never be a partisan issue, and with our actions today, we are protecting fundamental rights under attack in the Supreme Court, as well as reaffirming our commitment to LGBTQ+ equality and creating a more perfect and inclusive union where love always wins.”

Senators recently agreed on a revised version that answered concerns among Republicans supporting the bill that the measure would trample on the religious freedom of institutions that refuse to recognize same-sex marriages.

The bill includes language that ensures that universities and other nonprofit religious organizations would not be required to provide any goods or services for the celebration of any marriage; would not lose tax-exempt status or other benefits for refusing to recognize same-sex unions; and added language to make clear that the bill does not require or authorize the federal government to recognize polygamous marriages.

Supporters of the bill said the legislation was needed after Supreme Court Justice Clarence Thomas wrote in a concurring opinion in the Dobbs v. Jackson Women’s Health Organization abortion ruling that the court should review Griswold v. Connecticut (1965), which established the right of married couples to use contraception; Lawrence v. Texas (2003), which protects the right to same-sex romantic relationships; and Obergefell v. Hodges (2015), which establishes the right to same-sex marriage.

Thomas said those cases were wrongly decided because the court interpreted the 14th Amendment, adopted in 1868 to assure “due process of law” and “equal protection of the laws,” as establishing rights that the nation’s founders never intended.

It was an issue that Sen. Bob Menendez highlighted when he voted yes on the measure.

“Despite the vast majority of Americans supporting same-sex and interracial marriage, the Supreme Court has indicated that it is open to reconsidering cases regarding marriage equality, including Obergefell v. Hodges and Loving v. Virginia,” said Menendez. “Today’s bipartisan vote reaffirms that we will not stand by and watch Americans be stripped of their fundamental rights, but will instead ensure equal justice under the law for millions of married couples.”

Additionally, the legislation would repeal the Defense of Marriage Act, which defined marriage as a union between a man and woman. The act passed the Senate in 1996 by an 85-14 margin and was signed into law by former President Bill Clinton.

“I am proud that today, the United States Senate lived up to our nation’s highest ideals by passing legislation that will protect the rights of all Americans, regardless of who they choose to marry,” said Booker. “No one in a same-sex or interracial marriage should ever worry about whether or not their marriage will be invalidated in the future.”