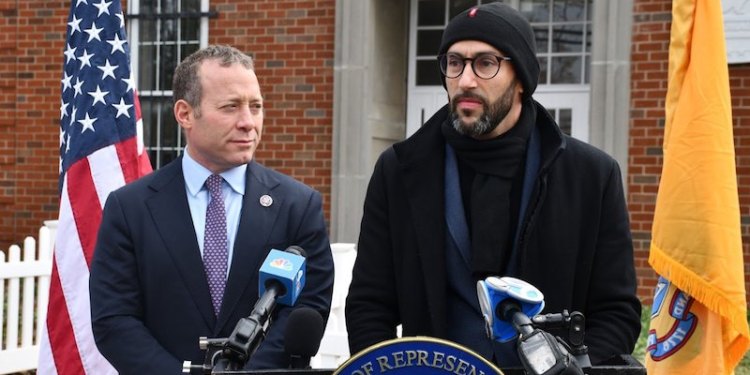 You may be familiar with porch pirates, but what about “post office pirates?”

This was the subject of Rep. Josh Gottheimer’s ire at a recent visit to Teaneck, where the legislator called on U.S. Postmaster General Louis DeJoy to investigate claims of fraud at the Teaneck Post Office.

“Unfortunately, here in Teaneck, because of an egregious lack of oversight and action at this post office, far too many residents have to worry that they could be the next victim of mail fraud, and that the checks in those Christmas cards might get stolen or altered. The circus at the Palisades Avenue Teaneck Post Office has gone on long enough,” said Gottheimer.

Gottheimer said that in 2020, checks were stolen from the Palisades Avenue Teaneck Post Office and employees engaged in mail fraud. Additionally, checks were “washed” at the location, meaning they were altered by post office workers to change the recipient’s name and the amount on the check.

“Our families deserve answers, and they deserve to know that USPS is doing everything they can to ensure that their gifts, mail, checks, veterans benefits, tax returns, Social Security checks, and life-saving medications are safe from thieves,” the Congressman noted.

Teaneck Councilman Michael Pagan said millions of dollars had been stolen from hundreds of residents within the town, and argued it was very tough to trust the local post office when viewed in this light.

“For more than two years now, our residents have been victimized and taken advantage of by criminals either inside this post office or from criminals fishing out checks from the local blue collection mailboxes you see located on corners throughout our township,” Pagan said.

Pagan himself was a victim of check washing on two occasions: one check was rewritten to $7,000 to a complete stranger, and another was cashed by someone other than the intended recipient.

“The victims we are talking about are older adults living on fixed incomes, single parents with children, middle class families and everyone in between. The feds have been taking far too long to solve this crime which continues to plague Teaneck,” said Pagan.

One of those victims was Teaneck resident Jeremy Lentz, who said his check was washed and forged.

“I had to go through a lot of things with the bank to get that money back and it was a very troubling experience for me. I know that many other township residents have gone through the same or similar experiences and none of those checks I mailed that day ever got to their destination,” he said.

Calling on DeJoy to Address the Issues

In a letter to DeJoy, Gottheimer demanded USPS make public what actions were being taken to improve operations at the Teaneck Post Office specifically and at other locations across the country. Additionally, he called on USPS Inspector General Tammy Hull to begin an investigation in earnest in order to better protect citizens from this type of fraud in the future.

The Bergen County lawmaker noted the issues come three years after an initial arrest of a post office employee at the facility, and recommendations to the local postmaster to improve mail security in and around Teaneck remain. He called on the Postal Inspection Service, the law enforcement arm of USPS, to redouble efforts to get to the bottom of the many open cases of stolen and lost property in the surrounding area.

“Here is my beef with this post office and the postal service. These victims did the right thing. They called me, they called the police, they told the post office. We did that same thing — even elevating to the regional Postmaster, the Inspector General, and the U.S. Postmaster General,” said Gottheimer. “I’m sick and tired of the inaction. The residents here deserve answers.”