The growth of antisemitism in America must be forcibly confronted 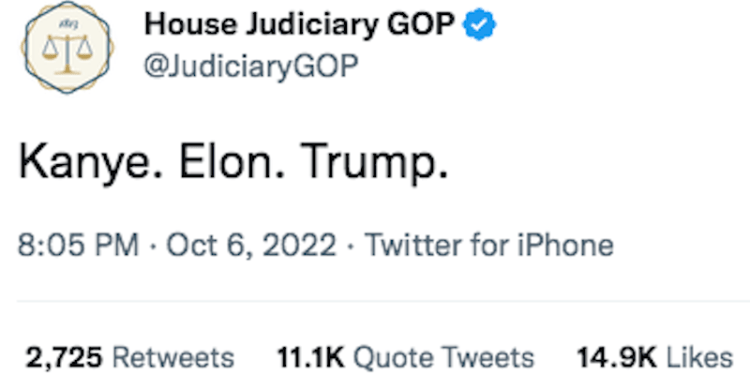 The headline expands on the tweet that was sent out by the Republicans House Judiciary Committee on the night of Oct. 6.

The message, a celebration of Elon Musk buying Twitter that would eventually remove the ban on Kanye West and Donald Trump, has a much different connection now.

Instead of using their power and influence to combat the hatred of Jewish people, some in the Republican Party remain supportive of the three men in varying degrees that have allowed for the amplification of antisemitism. We see it as the first test for Republicans seeking the party’s 2024 nomination to be President.

While most of us were enjoying our families to kick off the holiday season, West and Trump were dining in Florida with Nick Fuentes, an outspoken antisemite, racist and one of the country’s most prominent young White supremacists.

Let us make one thing clear here: We are very aware of the Trumps strong bond with the state of Israel and the Jewish religion. And we are not stating the Musk and Trump are antisemitic. What we are questioning is their association with those who are—that association results in the mainstreaming of antisemitism.

Trump’s former Ambassador to Israel David Friedman said it best in his tweet over the weekend: “To my friend Donald Trump, you are better than this. Even a social visit from an antisemite like Kanye West and human scum like Nick Fuentes is unacceptable. I urge you to throw those bums out, disavow them and relegate them to the dustbin of history where they belong. I condemned Barack Obama associating with Louis Farrakhan and Jeremiah Wright. This is no different. Antisemites deserve no quarter among American leaders, right or left.”

West, Musk and Trump influences go way past politics. We hate the term but they are influencers whose words and actions to a large swath of not just Americans but global citizens tell them what is ok and who and what should be scorned.

Fuentes, as detailed by Robert Costa, is a part of an “online extreme media landscape that now churns daily, but it is often on closed social media groups outside of media glare. It is in these spaces where unvarnished hate about Jewish people, racism is rampant. Nick Fuentes, while young, has gained major traction in these spaces. He links himself and his followers to core tenets of Trumpism by chanting ‘America First’ and uses monologues in the style of Alex Jones to gain notoriety with a cackling, racist, and grim take on modern U.S.”

Trump, West and Fuentes’ common thread is their use of social media to spread their message and connect with those who have the same beliefs. Under the twin guise of the 1st Amendment and fighting against “cancel culture,” they allow and amplify the worst parts of hatred towards others, with those of Jewish descent at the top of the list.

For this group, which resides mostly but not exclusively in GOP circles, this is a feature and not a bug.

Their ability to spread their message received a boost as Musk has reinstated the accounts that the previous leadership had suspended due to cases of spreading misinformation and hate, including Jones, and Steve Bannon. At the same time, his company has suspended left-leaning accounts such as Chad Loder, an antifascist researcher whose open-source investigation of the U.S. Capitol riot led to the identification and arrest of a masked Proud Boy who attacked police officers.

This was the exact misgiving we had when Musk first announced he was buying the company—the dropping of guardrails that allowed for misinformation and hate speech to go unfettered. We do not deny him the right to run the business as he fits as long as no laws are broken. This is consistent in support of previous management to restrict the access as they saw fit. It is a private business and we will stand with Musk in his right to run the business in the way he sees best.

But his decision to allow the return of extremists hate groups and individuals is 100% wrong. There are more than enough incidents that have documented the connection to violence and social media that a rigorous overseeing of content is called for.

It is incumbent for all of us to denounce hate speech—within our circle of family or friends who say “it’s just a joke” to the “you know it’s true” sentiments to would-be Presidents and their dinner companions.

Words matter. Actions matter. Antisemitism is on the rise in this country and its way past time that leaders, both private and public, not only denounce it but lead in rooting out people and institutions who promote it.