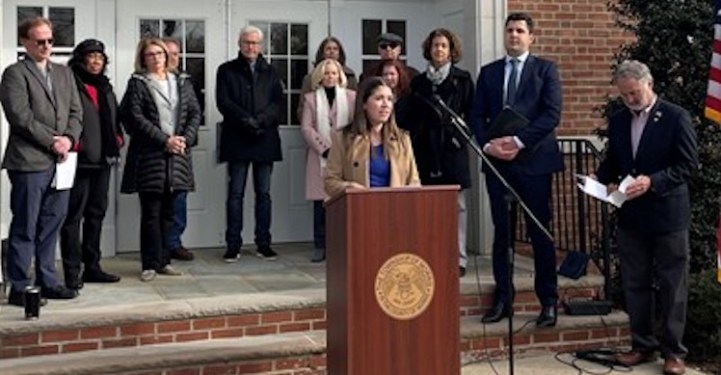 A bipartisan coalition of Morris County Mayors are calling on Trenton lawmakers to provide municipalities with relief from pending increases to state health insurance premiums.

At a Nov. 29 press conference in Morris Township, the mayors spoke out against the proposed increase of more than 20% to the State Health Benefit Program, saying the double-digit hike promises to be a budget-buster for municipalities and would have a drastic impact at the local level.

Morris Township mayor Mark Gyorfy, a Democrat, described it as a “gut punch” to municipal officials, their employees and taxpayers.

“To put it in perspective, our towns were dealt blows during the COVID-19 pandemic with a burden of added costs, delays and regulations,” he said. “As we started to get back on our feet, inflation came with huge increases for basic goods and services, causing towns like ours to push off projects and reduce long-term investments just to make ends meet.”

“Now, as we finally started seeing light at the end of the tunnel for our public finances, our public employees and municipalities are left grappling with insurance premium hikes,” Gyorfy stated.

After pointing out that many municipalities are still grappling with the economic impacts of the pandemic, the mayors described the premium increase as “yet another burden taxpayers and public employees will be left to carry and will leave many towns grappling with the potential for layoffs, the cancelation of important public projects, and/or tax increases.”

It could also lead to hiring freezes, cuts in municipal programs and services and less take-home pay for public employees, mayors said.

One possible solution, the coalition believes, would be for the state to tap into “a record $6.8 billion surplus in this year’s state budget” to provide “stability and relief” from the proposed premium increases.

Approved in September by the State Health Benefits Commission, the new state insurance plan stands to hike rates by more than 20% for 2023 on health plans that cover over 815,000 public employees, early retirees and school employees.

Faced with the unexpected increases, unions and local governments are left looking to Trenton to offset the costs, while a growing number of municipalities, officials, school boards and associations have spoken out against it.

Gov. Phil Murphy has blamed the rising premiums on a post-pandemic surge in demand for healthcare services, along with rising costs, and reiterated that the increasing cost a nationwide issue not unique to the Garden State.

However, the administration struck a deal to limit the increases for state workers to just 3% in exchange for higher co-pays for specialist and urgent care visits, leaving the state to take on the rest of the financial burden. Murphy now says he is open to finding a way to provide relief for local governments and their employees.

‘Better Planning Should Have Been Done’

Chatham Mayor Felice, the coalition’s lone Republican, noted that the township’s healthcare costs represent 10% of its operating budget, which means the planned increases for 2023 “will be a large burden” on both the tax paying base, as well as municipal employees.

“Increases of this size are not something people typically anticipated or planned for and when you couple this with the already out of control inflationary environment impacting them at the grocery store, gas station etc. it has a snowball effect which forces them to make hard decisions on what they can and can’t afford monthly,” said Felice. “Increases like this coming from our government are preventable and better planning should have been done for the sake of everyone.”

According to Morristown Mayor Dougherty, the issue needs to be addressed now because any additional increases in the future would set municipalities back even further.

“The other 800-pound elephant in the room is eventually we’re going to have to talk about how communities can merge together in ways to save tax dollars,” said the Democratic mayor, adding that it may eventually include merging towns themselves, not just services like fire departments or public works.

“I think there’s time now that we have to seriously sit down at the table and figure out how we’re going to move forward over the next decade, the next 20 years,” he said.

Following the press conference, State Sen. Anthony Bucco (R-25) issued a statement saying the mayors “are right to be upset” about the lack of transparency regarding the “massive health insurance premiums.”

“It’s clear…that Governor Murphy knew this was coming as early as February, months before the increases were announced. Had the governor shared that knowledge with the rest of us this Spring, we could have worked on a solution with mayors, local governments, and the administration as part of the State Budget adopted in June.”

Bucco went on to say the administration has refused to consider cost-saving solutions and has not held Horizon Blue Cross/Blue Shield accountable for its failure to achieve savings for the State Health Benefits Plan as required in its contract with the state.

The Morris County lamaker noted there is $10 million in surplus revenues and unspent federal pandemic relief funds available during the state budget process that could have been used to lower costs and prevent the spike.

“The Murphy administration has ignored multiple opportunities to work with stakeholders to control costs and find an equitable and affordable solution to prevent these massive premium increases,” added Bucco. “As a result of these many failures, local government budgets are getting slammed with a huge unexpected cost that will likely lead to big property tax increases in Morris County and across New Jersey.”