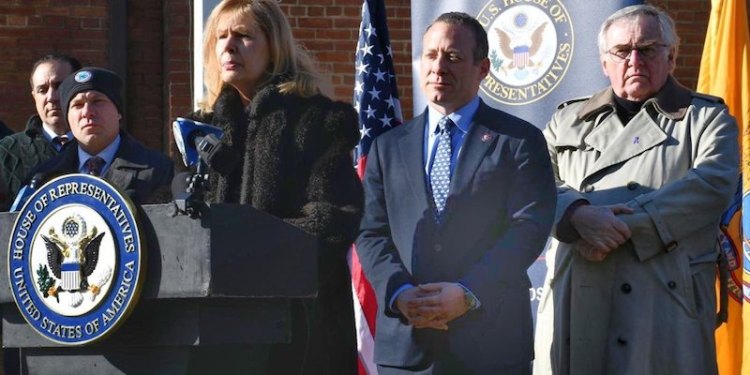 Bipartisan legislation aimed at making it harder for terrorists to rent vehicles to use as weapons was signed into law Dec. 23, 2022 by President Joe Biden as part of a national defense bill for fiscal year 2023.

Named after a 32-year-old New Milford man killed five years ago in a truck attack in New York City, the Darren Drake Act directs the U.S. Department of Homeland Security to develop guidelines for car rental agencies and dealerships to identify individuals who might want the vehicle to commit terrorist attacks.

During a press conference last month at New Milford Borough Hall, just feet away from the Darren Drake Memorial, Gottheimer was joined by Drake’s parents, as well as local elected officials and first responders, to announce the enactment of what he described as “commonsense legislation…[that] is an important addition to our arsenal as we continue to eradicate threats of terror at home and abroad.”

“Here in America, when we are threatened on our own soil, we can strike back,” said Gottheimer, a member of the House Homeland Security Committee. “We must never give into the threat of extremism. And the Darren Drake Act is an example of what we can achieve as Americans when we come together to make positive change.”

Drake was among the eight people killed on Oct. 31, 2017 in New York City, when Sayfullo Saipov, an Uzbek national from Paterson, allegedly drove a pickup truck he rented in New Jersey along a bike path near the Hudson River. The incident left at least a dozen pedestrians injured, according to authorities.

In the wake of the tragedy, Gottheimer, a member of the House Homeland Security Committee, began calling for regulations to strengthen information collected by vehicle rental companies and dealers in order to deter lone-wolf terrorists from committing similar attacks.

The North Jersey congressman worked closely with Drake’s parents, Barbara and Jimmy Drake, to craft and advance legislation, as well as fighting to get the bill across the finish line.

Jimmy Drake: Measure Will Save Lives

Following Gottheimer’s announcement that the measure was set to become a law, Jimmy Drake said, “What I choose to feel is that this is our Congressman’s early Christmas gift to the country. It will be saving lives from terrorists and extremists and people that want to do nothing but hurt and kill.”

Barbara Drake thanked Gottheimer for shepherding the bill through Congress and getting the Senate to support it.

She added, “While it can’t bring Darren back, it’s something positive that has been created in the way of being able to see more information on the person who is renting a vehicle and in this way possibly saving lives.”

Gottheimer described the Drakes as dear friends and applauded them for their dedication to the cause over the last five years.

He went on to say, “Together, leaning on their strength, and the support of the Jersey community, we stood up to terrorism. We did it to help protect our families and our country. And most importantly, we did it for Darren — to honor his memory. America will be safer — and lives will be saved — because of Darren. Today is a loss for the terrorists, and a win for freedom and democracy.”