Hudson County resident expected to run for governor in 2025 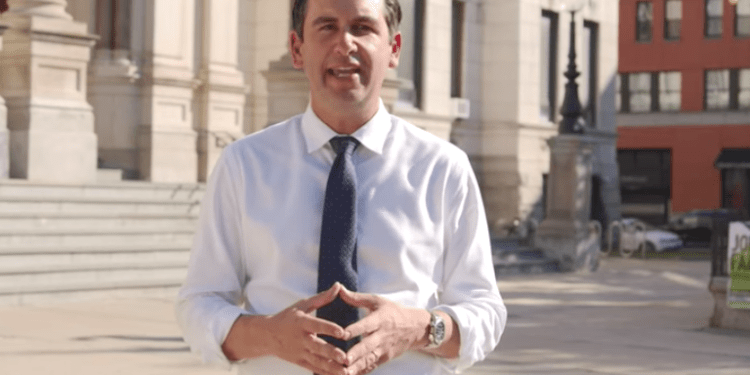 Jersey City Mayor Steve Fulop announced on Jan. 3 that he would not seek a fourth term as mayor of the state’s second largest city.

“After talking it over (with his wife) Jaclyn, I’ve decided that I won’t be on the ballot again as mayor. I want to make that clear,” Fulop said in a video shot in front of city hall. “It’s time to let someone else lead this special city, and for me to really think about what I want to do next.”

The video ends with a black screen that says “Want to know what’s next? Sign up: http://www.SteveFulop.com.” The “what’s next” is expected to be an attempt to be the Democratic nominee for governor in 2025.

Fulop grew up in Edison and worked at Goldman Sachs before enlisting in the U.S. Marine Corps after 9/11 and being deployed to Iraq. Fulop won his first race in Jersey City in 2005 when he defeated incumbent Junior Maldonado for the Downtown Ward E council seat.

Eight years later, he would defeat Mayor Jerramiah Healy by a 53%-38% margin. In 2021, Fulop defeated Lewis Spears 68%-32% as he became the first mayor in the city’s history to win a third term. His current term runs until January 2026.

In his 90 second video announcement that called back to his first ad he ran in the 2013 mayoral race, Fulop cites accomplishments as being a national and world leader on such items as affordable housing, development in parts of the city besides the waterfront, transportation, economic development, expansion of open space and dedication to the arts.

“I first ran for elected office in Jersey City when I came back from serving abroad in the Marine Corps because I believed that I had something different to offer both as a leader and as a public servant, and I could not be more proud of the progress that our community has made since then,” said Fulop. “Running for office outside the political establishment and standing up to powerful interests to fight for Jersey City’s future has been both incredibly challenging and rewarding.”

A 45-year-old grandson of a Holocaust survivor, Fulop offered that he will continue to work on the “forward momentum happening in Jersey City (that) is undeniable.”

“While there is much more work to be done I feel confident that new leaders can build on the foundation we have built while charting their own unique path forward,” he said. “I will continue to focus with the same energy on the projects and initiatives that we started. I love Jersey City and the city’s future is bright.”

Fulop is one of the Democrats who have been mentioned as eyeing the governor’s race for 2025 as Gov. Phil Murphy is term limited. Others that Democratic insiders have mentioned as making a bid include Reps. Josh Gottheimer and Mikie Sherrill, Assembly Speaker Craig Coughlin, Newark Mayor Ras Baraka, Montclair Mayor and New Jersey Education Association President Sean Spiller, and former Senate President Steve Sweeney.

Fulop has already received public declarations of support from his county base—Hudson County Democratic Chairman Anthony Vainieri, State Sen. and North Bergen Mayor Nicholas Sacco, and Craig Guy, the leading candidate to become Hudson County Executive this year, have all made public proclamations that they would support Fulop in his bid to reside in the governor’s mansion. And a super PAC allied with Fulop, Coalition for Progress, has more than $5.9 million cash-on-hand as of Nov. 28, 2022.

If he enters the race, it would be the second time Fulop attempted to be his party’s nominee. He entered the race in 2016 only to bow out a short time later.

For Republicans, 2021 GOP nominee Jack Ciattarelli in his concession speech to Murphy 10 days after the election said that he would run again in 2025.