New Jersey Minimum Wage Increased to Over $14 per Hour 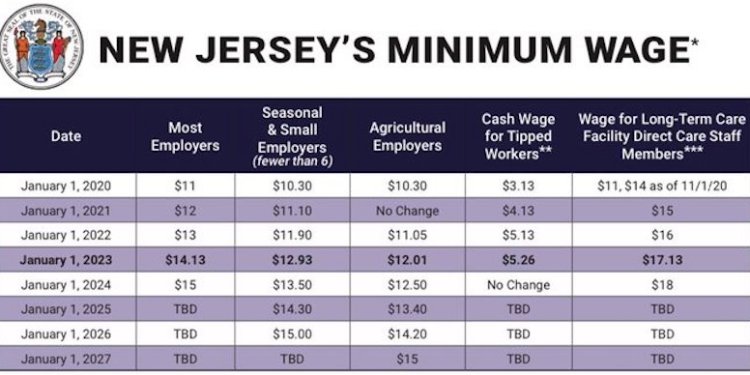 After the ball dropped in Times Square on Jan. 1, the statewide minimum wage increased $1.13 to $14.13 per hour for most employees.

The increase was part of a larger effort from the Murphy Administration to gradually increase the minimum wage to $15 per hour for most employees by 2024.

“This increase will ensure that hundreds of thousands of hardworking people across our state are paid a wage that allows them to provide for their families and live with greater dignity,” said Gov. Phil Murphy. “To solidify New Jersey as the State of Opportunity, we must continue our mission of building a stronger and fairer economy that works for every family, and that begins with growing our middle class.”

The minimum wage was $8.60 per hour in 2018 when Murphy first took office, and under a law signed in 2019, the wage was to be increased by $1 per hour each year. The legislation included a clause for larger increases if warranted due to significant increases in the Consumer Price Index (CPI).

“Moving families towards $15 an hour was a monumental accomplishment for the working people of our state. With the sixth highest minimum wage in the nation, I am proud of the action we have taken to incrementally raise the floor and secure the fair, livable wage all New Jerseyans deserve to be able to meet their basic needs,” said Assembly Speaker Craig Coughlin (D-19).

After the wage reaches $15 per hour in 2024, further increases will be dictated by increased in the CPI.

The law held carveouts for law, seasonal, and small employers who will be given until 2026 to pay workers $15 per hour. The minimum hourly wage for these workers increased to $12.93 per hour, up from the prior $11.90 rate.

Additionally, agricultural workers are guided by a separate minimum wage timetable. These workers won’t see $15 per hour until 2027, but they will see an increase to $12.01 under the new schedule.

Long-term care facility direct care staff will see minimum wage rise to $17.13, while tipped workers’ cash wage will increase to $5.26. Employers will be able to claim a $8.97 tip credit. Employers will still be required to pay the difference if an employee’s tips and cash wage equal the state’s minimum wage.

The amount of wages subject to wage taxes in 2023 increased to $41,100 for employers covered under the Temporary Disability Insurance program.