Today marks the 2nd anniversary of the attack on the U.S. Capitol 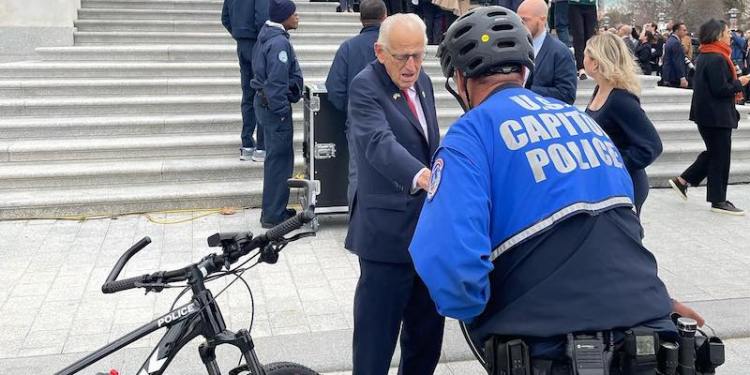 Today marks the 2nd anniversary of the attack on the U.S. Capitol by a mob of Donald Trump supporters. North Jersey lawmakers offer their remembrance of that day and what need to be done going forward.

“January 6th, 2021 was among the darkest days in American history. We watched, aghast, as a violent mob —called to action by former President Trump —sought to prevent the democratic transition of power, assassinate elected officials, and undermine the Constitution. The insurrectionists attacked law enforcement officers, including fallen hero and New Jersey native Brian Sicknick, and desecrated the halls of Congress, demonstrating contempt for the rule of law and democracy itself.

“Since that day, Congress has taken the first steps to prevent the events of Jan. 6th from repeating themselves, but we must do more to protect our democratic institutions. With the recent passage of the Electoral Count Act, we took important bipartisan action, however, the presence of election deniers in Congress and throughout state governments represents a continued threat to our democracy. It is incumbent on every single person in this nation to do their part to defend our democracy. Every single one of us must guard against those who would erode its tenets and its promise for political gain. As we have seen around the world, it only takes a few demagogues, a small group of radical extremists emboldened by autocrats, dictators, and those drawn to fascism and nationalism, to destroy the democratic principles and norms we have always taken for granted.

“So today, let us remember and recommit to the oath that every federal official, every servicemember, and every new U.S. citizen swears to uphold: to support and defend the sacred Constitution of the United States against all enemies, foreign and domestic. We do this by calling out those who refuse to accept defeat in a free and fair election. And we do this by rejecting not only those who sow deep distrust in the integrity of our elections, but those who provide them a platform as well.”

Gottheimer comments are taken from a press event this morning highlighting the passage of the The Electoral Count Reform Act and The Presidential Transition Improvement Act.

Two years ago on this day, my colleagues and I — both Democrats and Republicans — sat side by side in the House chamber awaiting the certification of our duly elected president when lawless thugs from across the country breached the United States Capitol — the beacon of democracy for the world.

They literally scaled the walls, smashed windows, broke down doors, used flag poles carrying our nation’s stars and stripes as weapons against our capitol police officers.

Why? They didn’t like the outcome that their fellow citizens had voted for.

They hunted down the vice president, often maiming capitol police and threatening the lives of Members of the U.S. Congress — Democrats and Republicans alike. Domestic terrorists came to the Capitol that day in an attempt to upend our democracy and our nation’s more than 230-year tradition of a peaceful transition of power. They sought to pressure Vice President Pence to unilaterally overturn the results of the 2020 election.

Their attempted obstruction was foiled, and our democracy persevered. Once again, America was triumphant.

Now, instead of letting that day divide us, Republicans and Democrats came together in both the House and Senate to protect our electoral system and the will of the American people, and to help ensure an attack on our Capitol never happens again.

This bipartisan legislation — now law — reforms and modernizes the outdated Electoral Count Act of 1887 and ensures that electoral votes tallied by Congress accurately reflect each state’s vote for President, further enshrining the power of each and every citizen’s vote. It will also replace archaic provisions of the 19th-century law to clearly designate the roles of the federal government when selecting the President and Vice President as set forth in the U.S. Constitution.The legislation also takes action to reduce frivolous objections to electoral count certification by raising the threshold to hear objections to a state’s electors from just one member in each chamber to twenty percent of Congress.

These are the actual, substantive electoral policy changes that have happened in the aftermath of the attack.

Over these two years, we’ve been reminded just how important it is to come together — across party, backgrounds, and any lines that divide us.  After the attack — a day that will always haunt our country — we came back to the House floor to certify the election, and I stood with Republican Congressman Tom Reed to address the House and urged both sides to come together.

To this day, my thoughts continue to be with the brave law enforcement brutally attacked and all their loved ones.

We must not forget the dark days we’ve been through, and we must commit ourselves to unity, civility, and truth, and embrace our calling to a higher purpose, one that helps strengthen our nation. That’s the only way we will keep it. I know that if we continue to come together to fight for and defend our right to vote, the integrity of our elections, our democracy, and our great American values, our best days will always be ahead of us.

​​Right now I am standing on the Capitol steps with my colleagues to mark two years since the failed January 6 insurrection. God bless American democracy still standing strong.

Why did democracy survive on January 6 two years ago? Because of the bravery of our law enforcement.

The insurrection on January 6th, 2021 was a day I will never forget. Every day we must choose to stand up for our democracy – like the dedicated Capitol staff and police officers, including the late Brian Sicknick – did that day.

Two years ago, a deadly insurrection was waged on the U.S. Capitol, the Congress, and the Constitution. As we remember January 6th, I am grateful for the heroic efforts of the five police officers who lost their lives and the more than 140 officers injured defending our democracy.

“It’s hard to believe the time it’s been since January 6 took place and how far we’ve come.

You know, as we stand here in the shadow of our nation’s Capitol, it strikes me what an iconic building this is and has always been a representation, a physical representation of all of the values that we in this country hold dear.

And that sense of awe has carried with me up until this day. So with that in mind, you can imagine how hard it was for me to believe, even as I was sitting on the floor of the House, that our beloved Capitol was being attacked by American citizens, sent over by the President of the United States because he didn’t want to leave office in our democracy.

Butt we didn’t. We were in the gallery. We were hoping we could certify our elections as was our constitutional duty.

And so as I was there, I was crouched down because we were concerned about active shooters. I was holding my cell phone in one hand to call my family as other members were calling their families, because they were afraid they weren’t going to make it out of the gallery. And I had a gas mask in the other hand, because we were concerned of the rioters if they broke through those barricades.

I sat there, and I had two things in mind that day. On one side, I had this great sense of sorrow that it had come to this, that our nation was so divided that people who were misled, as Jason said, veterans on both sides of those doors would come and attack our Capitol.

And then the other side of my brain really had a sense of rage.

I’ll give you a little bit of the inside scoop on the Capitol. Many of the members hate this green pin. They think it’s a ridiculous color. But I got to tell you, as I stand here today, I think it’s great.

We are prepared and ready to make sure that going forward, our democracy is stronger and more resilient than ever.

And so it’s with almost a sense of joy that I start this new term in Congress because I know the American people have our back.

I know these veterans are never going to forget their oath to the constitution and are always going to fight to protect and defend our Constitution against enemies both foreign and domestic. We will keep up that fight, and we know you’re all with us.

Thank you for coming here today to make sure that we can always remember what we’re fighting for and why it’s so important.

And I’ll end like everybody else. God bless the United States of America.”

“Two years ago, the very heart of our democracy was viciously attacked. The images of the January 6th insurrection are seared into our minds– the chaos fed by lies, the vandalism of our Capitol, the violence of the armed mob, and the bravery of the Capitol Police. They are what drive our work to protect and preserve America’s fragile and precious democratic experiment.

“To the Officers who served that day, including New Jersey native Capitol Police Officer Brian Sicknick, who lost his life defending his country, we remember and honor you.

“As helpless as we may have felt watching the events of January 6th unfold, in the two years since, we have taken decisive legislative action to strengthen our democracy. In New Jersey, voting rights and access to the ballot are sacrosanct. In New Jersey, laws are crafted to honor the Constitution and protect the rights of our residents to live not just in freedom but in safety. And in New Jersey we are the first state to ensure that our kids, and the generations to come, possess the skills needed to discern fact from fiction and reject disinformation.

“The road toward healing the division in our nation is a long one, but we have begun the journey. And, as stewards of the greatest democracy in the world, there is no challenge we won’t overcome to protect it and pass it onto the next generation of Americans.”