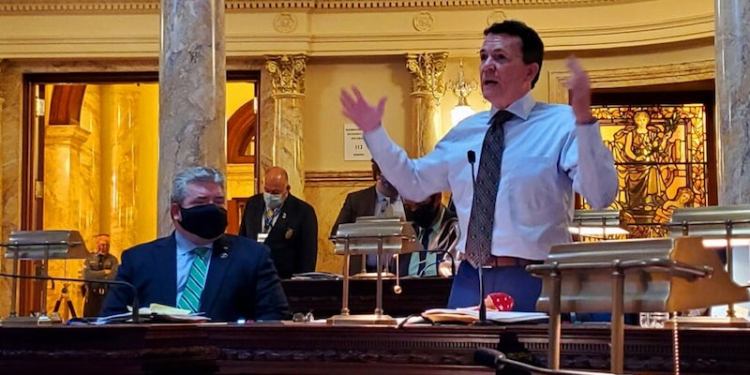 The 59-year-old Republican from the 13th district took Murphy to task for what he believes is reckless borrowing antics, driving New Jersey deeper into debt, while sitting on billions of unused COVID funds, and the JBOC for their willful inaction in dealing with inflation, costing New Jersey taxpayers over $500 million in lost revenues, over the last six months.

O’Scanlon questioned the Governor’s rational on issuing $750 million dollars in high-interest debt with interest-only payments for the next 10 years when the state has billions sitting unallocated in its debt defeasance and prevention fund.

“The debt defeasance and prevention fund was created to offset reckless and expensive borrowing of the exact type that the Murphy administration will soon issue for the Transportation Trust Fund,” said O’Scanlon, a member of the Senate Budget & Appropriations Committee.

“Instead of using funds already on hand to pay for our upcoming transportation needs, the governor wants to commit to 30 years of debt while kicking the can on principal payments ten years down the road. This proposed borrowing is utterly irresponsible and repeats the financial malpractice that has buried New Jersey in debt.”

The announcement by the administration that it intends to finance the Transportation Trust Fund (TTF) with $750 million dollars in borrowed funds at rates of 5% to 5.5% for the next 30 years with interest-only payments until 2032 makes no sense to O’Scanlon, who noted that the state has $3 billion in unallocated funds sitting in the state’s debt defeasance and avoidance fund.

In total, debt service on the TTF debt will include $1.5 billion in repayments, including interest that will cost New Jersey taxpayers more than double the $750 million that the Murphy administration plans on borrowing.

“Since TTF debt is repaid through gas taxes collected at the pump, Gov. Murphy is setting the stage for another big gas tax increase at some point in the near future,” added O’Scanlon. “To commit to such an irresponsible borrowing scheme when the state has money sitting in the bank to prevent new debt shows just how little the governor cares about helping families that are struggling with high taxes, inflation, and gas prices.”

O’Scanlon took aim at the JBOC for their continued lack of oversight and their indifference in allowing inflation to consume over $500 million dollars of taxpayer money after their year-end meeting last month..

In a lengthy statement O’Scanlon addressed the issue offered that JBOC’s actions in respect to the $6.2 billion federal block grant received 19 months ago in May 2021 “is around the margins” as it simply shuffled around about a dozen previous allocations to new departments to administer.

“It’s all frittering around the edges while we should be putting this money to good use helping businesses still struggling and wisely investing the money in ways it would provide relief for our beleaguered taxpayers,” he said. “The fact that we haven’t had the two JBOC meetings required by law over the last six months, and the insulting lack of any substantive action on this agenda, is a real slap in the face to those businesses and taxpayers.”

The GOP lawmaker bemoaned that there is currently $1.5 billion in grant has sat unallocated for any purpose whatsoever as well as $5.2 billion of the $6.2 billion received in May 2021 remains in state accounts to this day, “moving at a snail’s pace and having earned 1% investment returns with inflation having eaten up more than 10% of the spending power.

“For those not good at math, that means the buying power of this $5.2 billion sitting around in state accounts has wasted away to the tune of more than $500 million,” he said. “Its taxpayer money, and we just set a half billion dollars on fire. Where is the sense of urgency, we should be feeling to put the money to its intended good use?!?

O’Scanlon noted that Republicans have proposed putting those funds towards use for local capital grant programs to address flooding, parks, and infrastructure projects as well as using the funds offset tax and toll increases that went into effect in the New Year.

“Our proposals have been ignored,” he said. “But if you won’t allocate money to local infrastructure, tax relief for people suffering from inflation, or to help people who truly need help—use it on something else.”

The South Jersey lawmaker opined that Murphy was slow-walking money given to New Jersey courtesy of federal taxpayers “is a joke and wasteful,” being spent without any legislative approval.

“The Governor—who has been allocated $500 million to spend in his sole discretion—has abused his authority by buying the Governor and Lieutenant Governor new SUVs; giving criminals leaving jail $4,000 checks; and building permanent bureaucracies with money that will eventually run out,” he said. “It’s absurd.”

O’Scanlon then turned his focus on his colleagues in Trenton, terming using money for pork in the appropriations act as “abuses”. He cited projects such as the building of ice rinks as well as “shoveling $20-70 million to clients of lawmakers” to build sports facilities that include cricket and rugby fields, as well as tennis courts.

“I can only share the obscene $20-$70 million range because the purpose of a $20 million pork grant of federal money was disclosed in response to an OPRA request, and we know that’s what it’s being used for,” said O’Scanlon. “However, the purposes of related grants have never been disclosed to anyone in the public despite Senate rules requiring such disclosure.”

“But it sure seems like those grants are likely going to the same, single, excessive project. And that’s just the tip of the opaque pork iceberg.”

O’Scanlon finished that the current process of spending federal money is a “secretive joke” that “blows huge chunks of money on frivolous things,” while leaving billions of dollars languishing in idle state accounts to be ravished by inflation so more than a half billion dollars of buying power just disappears.

“JBOC needs to get serious. Oversight has been non-existent,” he said. “People’s money is being wasted and the majority members of JBOC are complicit. (Their recent) meeting isn’t oversight at all—it’s part of the problem.”