Republicans: Murphy’s Rosy Address Not Based in Reality 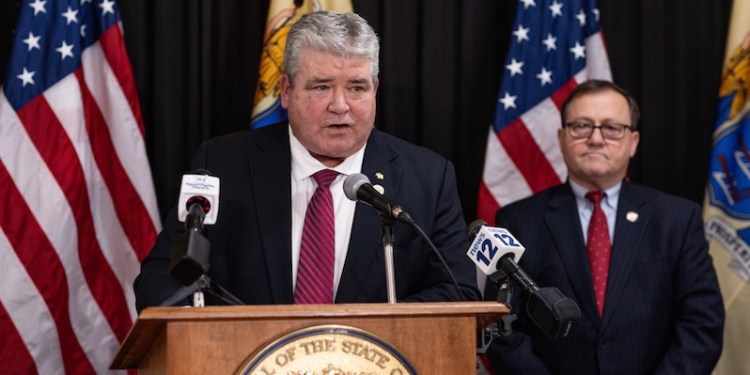 Two Republican North Jersey State Senators said that Gov. Phil Murphy’s State of the State speech did not address the concerns that New Jerseyans have, a theme expected to be used this election year by the GOP.

State Senate Minority Leader Steve Oroho (R-24) said that despite the rosy picture Gov. Murphy is trying to paint, the state of the state is not good.

“After five years of the Murphy administration and two decades of full Democrat control of the Legislature, the outlook for New Jersey continues to get worse,” said Oroho. “We have the highest taxes, the most debt, and the worst business climate in the nation. Every year when national rankings come out, New Jersey is dead last.”

Oroho said the state’s budget process is out of control, with spending up nearly 50% since  Murphy took office.

“Democrats continue to show no shame in tacking on billions in pork every year with no legitimate review or oversight,” he said. “While they’re busy wasting billions on pet projects, they’ve failed to effectively manage the cost of benefits for hundreds of thousands of public workers. This year, that’s resulted in huge increases in health care premiums for local governments that will lead to spikes in property taxes across New Jersey.”

Oroho would go on to list a number of areas where costs have risen and questioned where has the federal aid gone that could be used to make New Jersey more affordable.

“Over the last three years, they’ve squandered billions—billions—in pandemic relief funds that New Jersey received through the CARES and American Rescue Plan acts,” he said. “Instead of solving big problems with those federal relief funds, like fixing our broken unemployment and motor vehicle computer systems, Democrats have absolutely nothing to show for the windfall we received.”

Lawmakers brought up the issue of learning loss that the Murphy Administration refuses to address, made worse by school funding cuts to hundreds of school districts enacted by the Democratic legislative majority.

“Instead of focusing on improving student achievement in reading, writing, and math, Governor Murphy and Democrats have politicized our schools by injecting their radical ideologies into state education standards, which ends up being a time-wasting distraction in our children’s classrooms,” said the Sussex County lawmaker. “Parents are upset and rightly so. They feel like they’ve been denied a voice in their children’s education, and they’ve been mocked and chastised by Democrats when they’ve come to Trenton to express concern.”

“Those parents deserve to be heard.”

“Since taking office in 2018, Gov. Murphy has weakened New Jersey with higher taxes and increased spending, which has only worsened the financial burden of families across the state,” said Bucco. “There’s no doubt New Jersey families are worse off today than they were five years ago as their pocketbooks have been decimated by soaring energy costs, growing tax bills, and record-high inflation.”

Bucco, who has worked on a bipartisan auto theft bill State Sen. Richard Codey (D-27) that Murphy said he would sign, attacked the governor for allowing crime to grow in the state.

“Many communities are worried that the Murphy administration has enabled a sense of lawlessness throughout the state,” he said. “After Gov. Murphy granted early release to thousands of inmates and tied the hands of police when dealing with rowdy teens, New Jersey witnessed a surge in crime, including an epidemic of car thefts and home invasions.”

The issue of crime was married by Oroho with the recent concealed carry law that was ruled as struck down in court earlier this week.

“Instead of standing up for the rights of citizens to protect themselves and live in safe communities, the Governor and Trenton Democrats have enacted unconstitutional restrictions on law-abiding firearm owners,” he said. “This week, a federal judge issued a scathing rebuke along with a restraining order to prevent parts of that unconstitutional new law, which we told the administration was unconstitutional from being enforced.”

The legislators up for re-election this year offered that Republicans are a better alternative to the Democrats when it comes to addressing the concerns of New Jersey residents.

“So whether you’re talking about our state’s high taxes, out-of-control spending, our dismal business climate, rising energy bills, lack of support for students, lack of respect for parents, rising crime, or attacks on constitutional rights – all the direct result of Democrat policies – it should be clear we can do better,” said Oroho.

“Governor Murphy can start by listening to Republicans who have offered sensible solutions to all these problems. New Jersey may be on the wrong track for now, but we’re showing it doesn’t have to stay that way.”

Assembly Minority Leader John DiMaio (R-23) added that “there’s a lot of things that have been done that have people riled up – in the classroom, in their pocketbooks, and in other things done to them. I believe we have a lot to talk about in the next 11 months.”