Comments come after State of the State Address 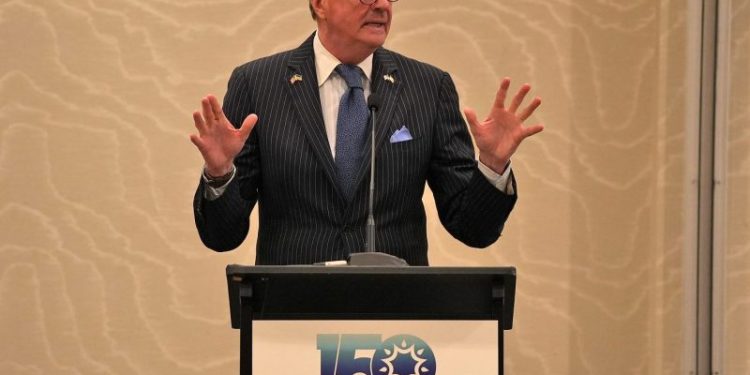 It was by all accounts a candid moment for Governor Phil Murphy speaking last week to business leaders, telling them to buckle up and get ready for the likelihood of a recession in 2023.

Murphy speaking at the Chamber of Commerce Southern New Jersey event in Mount Laurel Jan. 11 appeared optimistic throughout most of his speech until he began to warn of the economic realities facing the Garden State, telling those in attendance, “what’s around the corner is what we have to be concerned about.”

The speech began as a typical boilerplate address to the business community, with the Governor repeating many of the same political talking points from his State of the State address along with praising the work of those in attendance.

However, the upbeat mood within the room quickly changed as Murphy bluntly explained what may lie ahead for New Jersey, predicting the likelihood of rising interest rates along with the potential of a recession in 2023.

The governor nevertheless felt New Jersey was in a good position to deal with whatever upcoming economic challenges the state may face within the coming months. Although a recession is likely, the governor believes it will be far less severe than 2008, when the country went into economic freefall because of the subprime mortgage crisis.

“I’m in the camp of a shallow — real but meaningful — but a shallow, fairly short-lived recession, and part of the reason I believe that is there’s an enormous amount of liquidity on the sidelines,” Murphy said during the annual luncheon.

“We all have to accept the fact when the Federal Reserve raises interest rates at the clip that they’re raising them, and (when) we’re dealing with real inflation and affordability challenges that we haven’t seen in 40 years, not only do we have to acknowledge that there’s pain at the kitchen table, but it’s axiomatic that the economy is going to slow down.”

Murphy paused a moment and then continued. “We haven’t seen it yet in our revenues at the state level. But that does not mean we’re not preparing for what will be thin ice.”

Better Prepared than Others

The former Goldman Sachs executive pivoted away from his gloomy forecast to a more positive tone, reminding his audience of his accomplishments, “we have a massive surplus, we’re reducing our indebtedness, we’re delivering relief, as best we can, first and foremost through property tax relief to ease the pain at the kitchen table.”

Murphy went on to explain that the Garden State is financially sound, sitting on $1.4 billion dollars in unspent funds, the largest surplus in the state’s history, compliments of the federal government’s “American Rescue Plan” package. Added on top of that is an estimated $12 billion dollars coming to the state through the and Bipartisan Infrastructure Bill, and millions more from the CHIPS Act.

However, that optimistic outlook according Treasury officials may be a bit premature considering that the states revenues gained through tax collections have been moderate at best for this current fiscal year.

Collections from New Jersey’s major revenue sources including the state’s sales, income, and corporate business taxes grew by only 0.5% this November over the same period last year.

The administration expects this trend to continue unabated for the rest of the year with revenues dropping by 3.2% compared to last year. Moreover, according to a recent Bloomberg poll the likelihood of a recession in 2023 stands at 70% by those economists surveyed.

OPINION: Murphy Must Deliver on Tax Cuts for All