Bipartisan bill has passed key committees in both houses 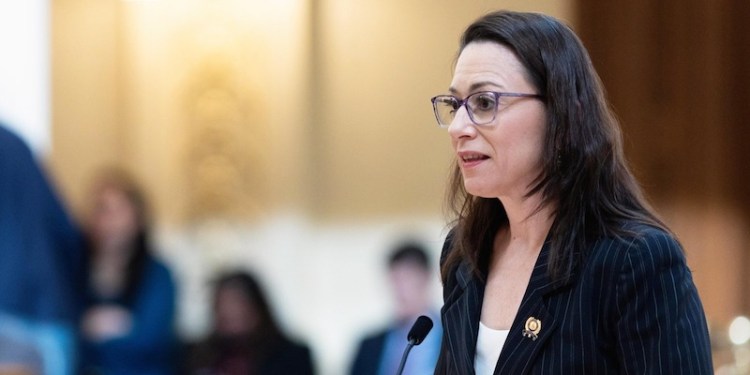 Trenton lawmakers in both chambers are moving forward with a bill that would make sextortion—the act of threatening to share nude or explicit images and videos to extort victims—a crime in New Jersey.

Passed by two State Senate committees last year, the bipartisan bill passed the Assembly Judiciary Committee on Jan. 19 that co-sponsor Assemblywoman Aura Dunn (R-25) said will ensure predators who engage in sexual extortion are punished to the fullest extent of the law.

“New Jersey’s most vulnerable populations—children and adults with developmental disabilities —are targeted by sexual predators who go where they go, places like online gaming sites and popular social media platforms,” said Dunn. “Crimes have evolved in the digital age and New Jersey’s laws have to keep up. Sexual extortion is a growing threat that must be addressed.”

According to the National Center for Missing & Exploited Children, the number of sextortion reports doubled between 2019 and 2021. Offenders exploit victims to get more explicit content, in-person sexual contact, and money. Last year, the FBI said that more than 3,000 minors, primarily boys, were targeted in financial sextortion schemes. More than a dozen of the victims committed suicide.

New Jersey’s laws currently make it a crime to commit sexual assault, harassment, endanger the welfare of a child and distribute child pornography. This bill (A343) would build upon existing statutes to ensure that it is also a crime to sexually blackmail individuals of any age, regardless of whether the explicit material is actually shared. A vote by the full Assembly is set for Jan. 26.

“Victims can be so humiliated and traumatized by the experience that they take their own lives. So, in addition to parents having conversations with their children about online safety, prosecutors need the tools to properly punish predators and stop these crimes,” Dunn added. “New Jersey needs to get tougher on these types of crimes to protect families from further devastation.

Madden pushed for the bill after a 17-year-old boy took his own life due to severe sexual extortion on social media.

“This crime is inhumane and has proven to be fatal on numerous occasions. It is a grievous form of exploitation and harassment. Especially with the prevalence of social media, cases of sexual extortion continue to increase,” said Madden. “This legislation is a vital step to addressing and combatting this growing epidemic. This bill provides law enforcement agents with the tools necessary to properly identify and prosecute this crime.”

Oroho said the legislation is looking to combat cyber bullying to protect “ the young victims who deserve the support and protection.”

“The emotional and psychological damage these violations can have on young people in unimaginable,” said Oroho. “The Legislature has a moral duty to pass this aggressive measure classifying this heinous abuse as a crime and protecting our children.”

The two State Senators highlighted an FBI warning that sextortion can begin on any online site, app, or game. In some cases, the interaction begins with a threat to reveal an image or video unless the victim provides more pictures.

The FBI advises on their web site that “this crime [often] starts when young people believe they are communicating with someone their own age who is interested in a relationship or with someone who is offering something of value.” The perpetrator then uses threats, gifts, money, flattery, lies, or other methods to get a young person to produce an image.

“This bill puts some real teeth in the law. Young victims are reluctant to report the abuses, feeling shame and embarrassment,” said Oroho. “When police officers identify those who are emotionally brutalizing youths, this legislation will send a powerful message that we will not tolerate this sexual bullying.”