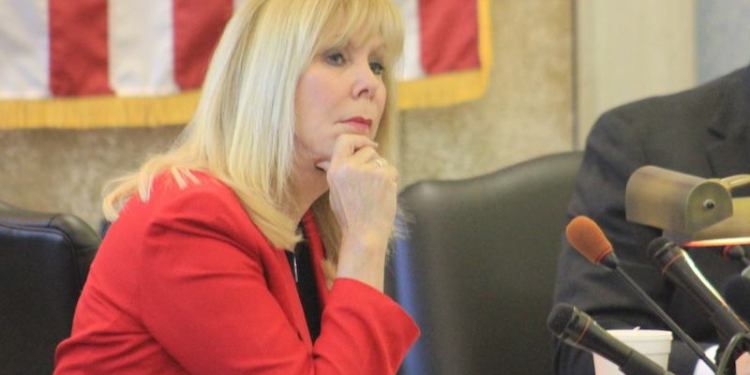 BettyLou wants her job back.

BettyLou DeCroce announced last week that she is seeking the Republican nomination for the State Assembly in the redrawn 26th Legislative District, two years after losing in a bitter GOP primary battle.

DeCroce, a Parsippany resident, formerly represented the Morris and Passaic counties in the Assembly for nine years under the old legislative district map after the death of her husband, Alex, who was the Republican Minority Leader when he passed in 2012.

DeCroce said she is running to reclaim her seat due to the need for “effective conservatives” in the state legislature.

“The state continues to slide into deeper and deeper into trouble under Democratic leadership,” said DeCroce. “Working people need representatives in Trenton who will put in the extra work it takes to make positive changes in their lives. I am committed to making those changes.”

Due to redistricting, DeCroce will not face the lawmaker who defeated her two years ago. State Sen. Joe Pennacchio and Assemblyman Jay Webber are holdovers from the previous map. But Assemblyman Brian Bergen will move over from the 25th to the 26th to run with the incumbents. Assemblyman Christian  Barranco, who defeated DeCroce in the 2021 primary race, will now attempt to return to office in the 25th Legislative District.

DeCroce’s defeat was a result of losing her home county Republican organizational line in Morris, which has the majority of voters in the district. Barranco, a member of the International Brotherhood of Electrical Workers (IBEW) Local 102, bested DeCroce by seven votes, 87-78, at the first-ever Morris County Republican convention. Webber was the top vote-getter with 117 votes.

The current Dover town administrator said her objective in this campaign is to fight the damage that “woke Democrats are doing to New Jersey…I’m pro-family, pro-business and pro-taxpayer and I have more experience in government than most people in the state legislature. I know how to get things done.”

The five term lawmaker cited her three priorities if elected would be parental rights in their children’s education, property taxes, and tackling the rising crime rate in the Garden State.

“Our children should graduate school with marketable skills in a competitive global environment, not with mastery of the woke agenda,” says DeCroce.

The Morris County resident will prioritize tackling the what she sees as the longstanding problem of the inequitable distribution of school aid in New Jersey, an issue DeCroce raised while serving in Trenton when she called for a statewide audit of education funding.

“New Jersey spends billions of taxpayer dollars on education, but relatively little of it goes to middle-class school districts—such as those in Morris and suburban Passaic counties,” said DeCroce. “The imbalance in state education aid forces suburban homeowners and renters to pay a disproportionately high share of their children’s education. That’s unfair and it drives up the cost of home ownership in New Jersey.  The burden of high property taxes is a determining factor in homeowner affordability.”

When it comes to the issue of crime, DeCroce argued that the Democrats’ soft on crime approach along with their disrespect for law enforcement is endangering neighborhoods throughout the state as stolen cars and violent home break-ins are have become “rampant” in Morris and Passaic counties.

“As a conservative Republican, a mother and grandmother, I have no higher priority than protecting the safety of our families and senior citizens,” she said.

DeCroce says a key part of her plan to bring effective conservatism to the state legislature is to get the public debate out of Trenton and bring it to communities in the district, promising to host regular town hall meetings in the district.

“Speeches on the floor of the Statehouse are not changing anything,” said DeCroce. “But an informed and energized electorate will.”