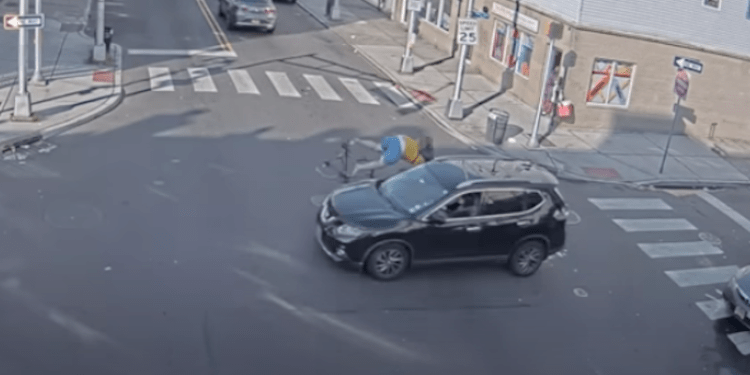 Jersey City Councilwoman Amy DeGise for the first time offered apologies to city residents and the bicyclist she hit last Summer after pleading guilty Jan. 24 to the hit and run charges.

“Seven months ago I made a mistake that I will regret for the rest of my life,” said DeGise in a written statement. “I want to offer my heartfelt apology to Andrew Black and I am thankful that he was not hurt.  I also want to apologize to the people of Jersey City for not only my actions, but for the negative attention they brought to our wonderful community.”

The statement from DeGise comes after receiving a sentence that resulted in her losing her driver’s license for one year and a $5,000 fine for leaving the scene of an accident. As part of the plea deal in the Essex County court, prosecutors dropped the other charge of failure to report an accident.

The incident on July 19, 2022, captured statewide attention after a Jersey City surveillance camera showed Black riding through a red light before being hit by an SUV that was later identified as being driven by DeGise. DeGise never stopped and didn’t report the collision until later that day.

DeGise, former chair of the Hudson County Democratic Party and daughter of Hudson County Executive Thomas DeGise, has faced calls to step down. Council members James Solomon and Frank Gillmore called on her to resign and residents, who packed a council meeting last August after the incident, had considered an effort to recall DeGise.

In her statement, DeGise made clear she intends to be a member of the council that she was elected to serve until 2025.

“I will continue to do whatever I can to help my community as an elected member of the City Council, and I will be serving the remainder of my term,” she said. “Public service is in my blood and is my calling. Helping people and building solutions in my home city means everything to me.”

“I have tried to focus since that day on continuing to serve my community with humility and a genuine desire to give back through meaningful work and fighting to make a difference in my constituents’ lives.”

Following the accident, published reports found the councilwoman had dozens of parking tickets she didn’t pay as well as a video of her appearing to use her political connections to prevent her unregistered car towed from being towed in Hoboken. DeGise noted that she damaged the city’s reputation and undermined “the work that is happening every day in local government to make it an even better place to live, work and raise a family.”

“I fully accept the legal consequences of my actions and now have an opportunity to serve my community, regain the trust of the people,” she said. “We all make mistakes in life, and I am so thankful to my family, friends, and core supporters who have stuck by me throughout this process.”

“I can promise the people of Jersey City, both those who support me and those who do not, that I will work as hard as I can to be an effective representative on the City Council. I am looking forward to moving ahead and taking everything I have learned in these past few months to represent this city and myself in the best way possible.”