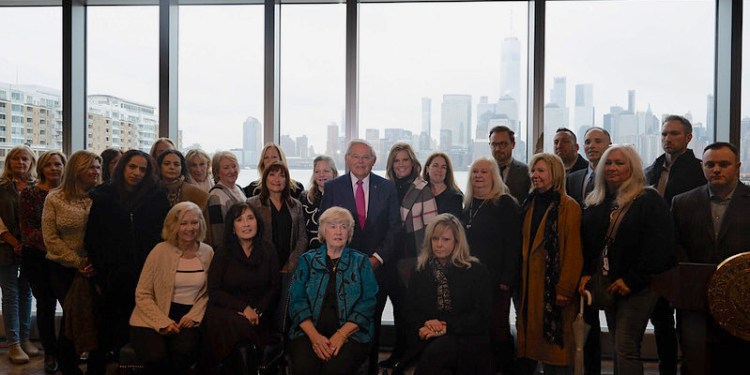 Sen. Bob Menendez recently celebrated the passage of the Fairness for 9/11 Families Act at an event in Jersey City with family members who lost loved ones to terrorist acts.

The bill, which passed the Senate in December 2022 as an amendment to the fiscal year 2023 funding bill, will add the victims of the 198 Beirut Marine barracks bombing and the 1996 Khobar Towers attack to those who are eligible under the U.S. Victims of State Sponsored Terrorism Fund.

“For many of these families, it has been years — if not decades — of waiting for the relief this bill provides. I’m honored to have been able to work alongside them and deliver this for them and for all the victims of state sponsored terrorism,” said Menendez.

“No action or words will remedy the grief of losing a loved one, but the Fairness for 9/11 Families Act sends a clear message that we are united in delivering justice for 9/11 families and other American victims of terrorism. I am proud to have cosponsored this legislation and applaud the courageous families and my colleagues for their hard work on its passage,” added Sen. Cory Booker of the bipartisan bill that had Sen. John Cornyn (R-TX)as Republican co-lead. Sens. Chuck Schumer (D-NY), Richard Blumenthal (D-CT), Chuck Grassley (R-IA), Kristen Gillibrand (D-NY), and Chris Murphy (D-CT) were original cosponsors, and Rep. Hakeem Jeffries (D-NY) introduced the House companion..

Signed into law by President Joe Biden in December 2022, the Fairness for 9/11 Families Act will provide relief for victims of state-sponsored terrorism by making them eligible for the U.S. Victims of State Sponsored Terrorism Fund (USVSST Fund).

These victims will be authorized for a catch-up payment for thousands of 9/11 victims, spouses, and dependents who were unfairly excluded when the Fund was first established in 2015. Additionally, it will expand the fund’s coverage to provide catch-up payments to other American victims of terrorism.

Menendez worked with the Government Accountability Office (GAO) to calculate the total value of potential catch-up payments to provide these previously-excluded spouses and children with the amounts they would have received if they had been part of the fund since its inception.

The amendment establishes a reserve fund to provide a catch-up payment to Beirut and Khobar Towers victims who were previously unable to join the fund, with additional reserves being allocated to all victims within, including Iran hostages, Kenya and Tanzania embassy bombing victims, and many other American victims of state-sponsored terrorism.

A number of victims from 9/11 and the Beirut Marine Barracks bombing were on hand and offered up their praise of the bill: