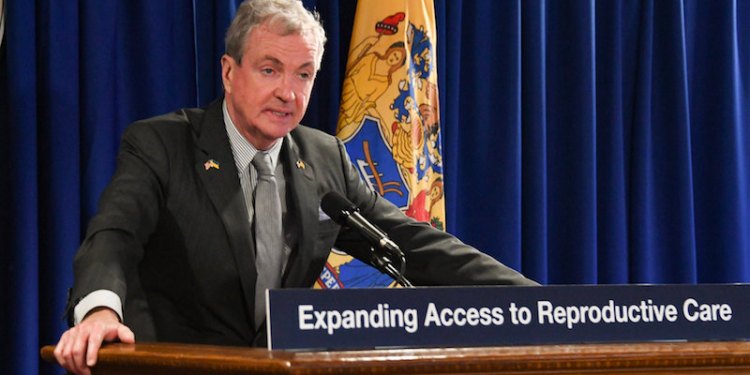 The 50th anniversary of Roe v. Wade had a different connotation after it was struck down by the Supreme Court last Summer, but New Jersey Democrats took the weeks leading up to the anniversary to reaffirm their dedication to the pro-choice movement.

Gov. Phil Murphy on Jan. 13 signed into law additional legislation to secure and expand access to reproductive healthcare. The bill was signed on the one-year anniversary of the signing of the Freedom of Reproductive Choice Act.

“While many other states are working to restrict access to reproductive healthcare – including contraceptives – our state continues to protect this fundamental right and expand access to this critical care on behalf of all who need it,” said Murphy.

“The current requirement of an individualized prescription imposes an unnecessary burden on people who may be unable to afford or find the time to go to a health care provider for a prescription. Removing that requirement will promote health equity and ease of access to contraceptives in order to empower women to make their own reproductive choices.”

Pharmacists will be required to standardized procedures and protocols jointly adopted by the Board of Pharmacy and the State Board of Medical Examiners. They will also be required to complete a training program.

“New Jersey is a leader in protecting reproductive health and rights,” said Health Commissioner Judith Persichilli. “This law removes access barriers to hormonal contraceptives and puts in place the necessary safeguards and protocols that will protect patient health, safety and privacy for New Jersey’s residents.”

Reps. Mikie Sherrill and Donald Payne, Jr. both lambasted what they see as recent Republican moves to infringe upon reproductive freedom.

The pair voted against two pieces of anti-abortion legislation put forward in the 118th Congress, with Sherrill saying the Republicans wasted no time in launching an attack on women’s reproductive freedom.

“Republicans in Congress have made themselves clear: targeting women’s reproductive rights is at the top of their priority list,” said Sherrill. “I proudly voted against uniformed members of Congress dictating how doctors practice medicine and put Republicans in Congress between women and their trusted doctors. In the 118th Congress, I will continue to fight for women’s access to reproductive health care and the right to make choices about our own bodies.”

The first bill, H. Con. Res. 3, would condemn recent attacks on anti-abortion facilities without any mention of increased assaults on pro-choice clinics and medical professionals. Payne noted attacks on abortion clinics increased 128% in 2022.

The second bill, the Born-Alive Abortion Survivors Protection Act (H.R. 26), requires doctors to provide the same standard of medical care for an infant born during an abortion procedure as they would for any other infant. It would override a doctor’s judgment, and would impose criminal penalties.

“Americans continue to reject their cruel and anti-American agenda in state and local elections nationwide. But Republicans don’t care and continue to push these initiatives against the will of the American people. Women should have the right to determine their own health care choices without any government interference,” Payne said.